Pangolins are scaly anteaters and their bizarre appearance suggests they are from the age of the dinosaurs. First described and documented by the German Zoologist Johann Karl Wilhelm Illiger in 1815 their bodies are covered in overlapping bony scales which act as both armour and camouflage. The keratin scales are movable and sharp edged and are developed from modified hairs like the horn of a rhinoceros. They are the only known mammals that possess this extraordinary feature. Living in hollow trees or burrows they are nocturnal and lead mostly solitary lives, meeting only to mate and produce a litter of one to three offspring which remain with the mother for two years. Like armadillos and anteaters, pangolins have no teeth and use their long tongue which can be extended as far as 16 inches to gather termites and ants. There are currently eight species of pangolin across the world and all of them are threatened by the heavy deforestation of their natural habitats and by poaching for their meat and scales.
Ex Private European collection 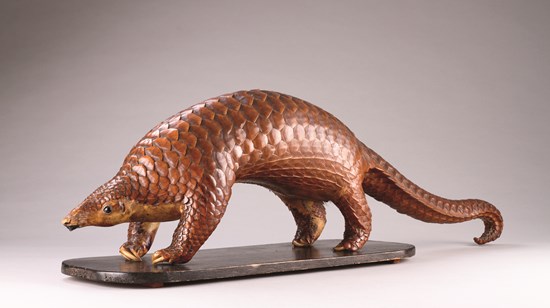 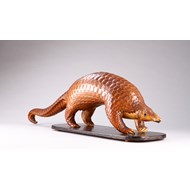 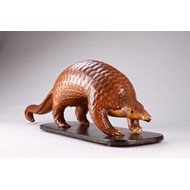