Size: 10cm high, 14cm wide - 4 ins high, 5½ ins wide / 6cm high, 20.5cm wide - 6¼ ins high, 8 ins wide (frame)
Anglo-Chinese Miniature Oil on Ivory Depicting a View of the Whampoa Anchorage in the Pearl River Estuary
This is an interesting view showing Whampoa Island on the Peninsula between Hong Kong and Canton from Dane’s Hill, with the nine stage pagoda in the distance. The ships have their masts lowered and are waiting in the channel to take on cargo. A small cutter with white sails is taking westerners to and from Canton. The merchant ships are all flying their flags, Dutch, American, British and Scandinavian.
At the beginning of the 19th century China still called itself the ‘Middle Kingdom’ and for thousands of years had conducted a policy of aggressive isolationism. Chinese citizens were forbidden to travel abroad. The information of the outside world that filtered up to the Emperor was very little, and if accurate, was seldom believed. The Europeans were equally ignorant about China because it was a closed country. They made a number of attempts to establish diplomatic relations with the Emperor. Some foreign embassies, like Lord Macartney’s in 1793 were treated with exquisite politeness, while others like Lord Ameherst’s in 1816 were grossly insulted. The Emperor Chien Lung (1736 - 95) made his position clear in an edict sent to King George III in 1793. He pronounced that all barbarian countries were vassal states of the Chinese Empire and no foreign legations would be permitted to be established in Peking. Furthermore, the King of England as a vassal of the Emperor, should ‘tremblingly obey’ the edict of the Son of Heaven. China’s position remained the same until after the end of the Opium War in 1842.
Ex Private American collection
Acquired New York 1972
Ex Private European collection

cf: Another very similar view in the collection of the Peabody Museum of Salem illustrated in ‘The China Trade’ by C.L. Crossman 1991 (pg. 114, plate 38) 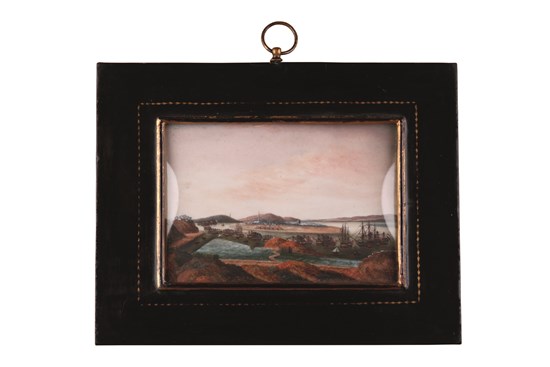 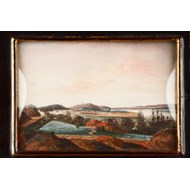 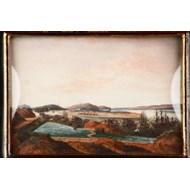 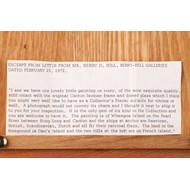 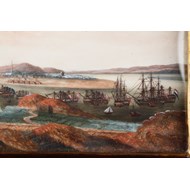 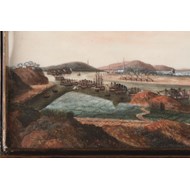