Caption Literature
An Ancient Egyptian Hollow Cast Bronze Votive Head of a Cat Sacred to the Goddess Bastet
Mounted on an old museum marble base entitled ‘Head of a Cat Emblem of Bast. Bubastis’
To the underside a further inscription in pencil ‘â€¦ 12/5/193â€¦. Ex coll Hon. Auberon Herbert’
Late Dynastic Period Circa 664 - 332 BC
Size: 6.5cm high, 4.5cm wide, 5.5cm deep - 2½ ins high, 1¾ ins wide, 2¼ ins deep / 8.5cm high - 3¼ ins high
Cats were important in Ancient Egypt both as domestic pets and as symbols of the deities Bastet and Ra. There were two indigenous species, the jungle cat ‘Felis chaus’ which is only found in Egypt and Southeastern Asia, and the African wild cat ‘Felis silvestris libyca’. Bastet was the cat goddess and particularly popular as the protectress of the household. She was the local deity of the town of Bubastis whose name means ‘she of the bast (ointment jar).’ She was regarded not only as the daughter of the sun god, but also as the more protective aspect of the mother-goddess, in contrast to the aggressive image of the lioness-headed Sekhmet. Portrayed as a cat-headed woman sometimes carrying a sistrum or rattle and accompanied by a group of small kittens, she could be found in the temples, in the home and in funerary contexts. 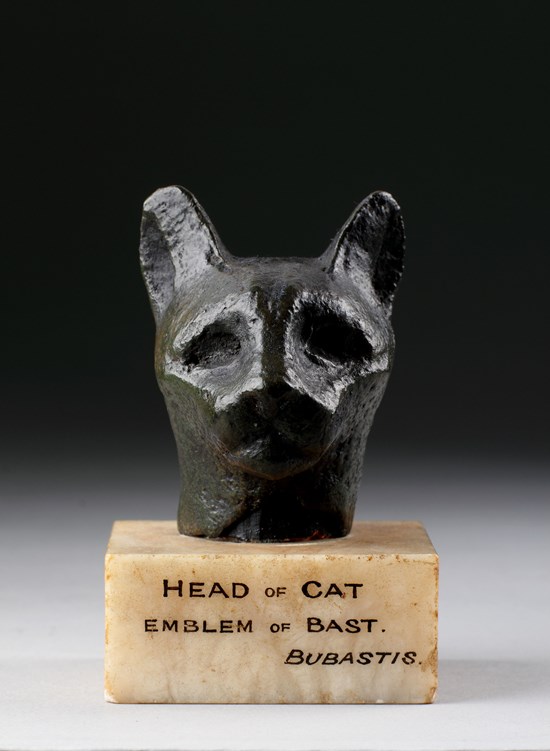 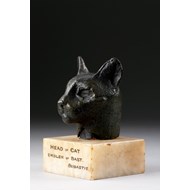 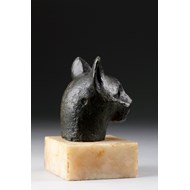 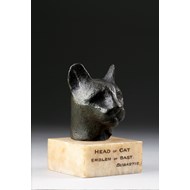 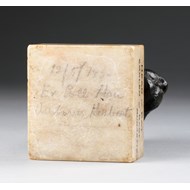