Caption Literature
Russian Archangel Carved Whalebone Box decorated with lattice work floral designs and a scene depicting a couple on horseback hunting a stag with hounds she with a spear he with a shotgun
The interior lined with blue paper on spruce-wood and compartmentalised probably for gaming counters
Complete with steel key
Circa 1800 - 1825
Size: 7cm high, 21cm wide, 16.5cm deep - 2¾ ins high, 8¼ ins wide, 6½ ins deep
Kholmogory on the Dvina River near Archangel in North East Russia had a tradition of making decorative objects in marine ivory and whalebone, decorated with openwork and incised patterns and classical motifs in relief. Early Byzantine texts alluded to the practice of carving in this area as early as the 12th century and by the middle of the 17th century the trade had grown to such proportions that Tzar Alexis I Mikhailovich introduced a state monopoly.
Initially the carving was practised by the local inhabitants as a craft when they were not working at sea or or on the land. As it developed master craftsmen emerged, some of whom were summoned to Moscow to work in the Armoury. The industry reached its zenith in the late 18th and early 19th centuries when quantities of carvings were shipped through the port of Archangel to cities in the south of Russia and sometimes exported abroad. 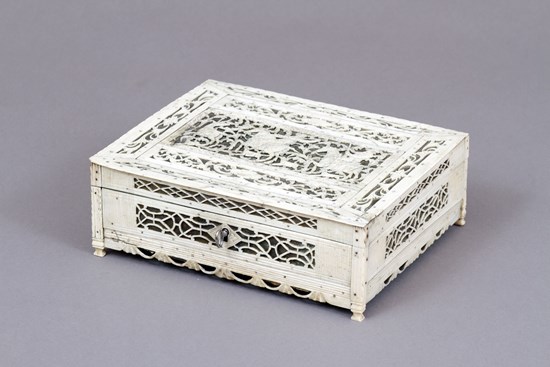 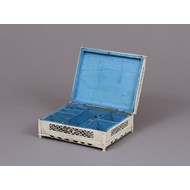 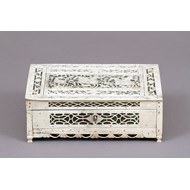 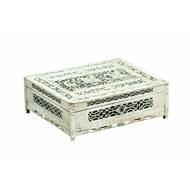 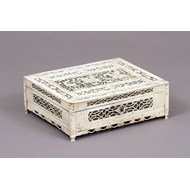 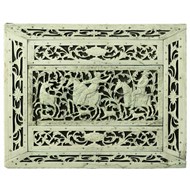 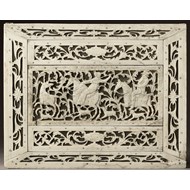