Caption Literature
A Fine Japanese Carved Boxwood Netsuke of an Oni Cowering Terrified Under Shoki the Demon Queller’s wide Hat his three fingered hand gripping the Brim his horned head tucked down with only the top of his eyes visible the top of the hat inlaid with two copper beans the Himotoshi formed in the gap between his three toed foot and his leg
Signed without reserve Shosan
Superb rich smooth dark brown patina
Mid 19th Century
Size: 2.5cm high, 3.5cm dia. - 1 ins high, 1¼ ins dia.
Japanese oni are devils and demons, sometimes of giant size, distinguished by two horns and three fingered hands and three toed feet. Normally cruel, mean and lecherous they are sometimes depicted in comical situations as intelligence is not their strong point. Shoki, the Demon Queller is the oni’s great enemy, who habitually tries to shorten or cut off the oni’s horns thereby depriving him of his evil power. Bean or peas are the only other things that frighten an oni and at the Japanese ‘Setsubun’ New Year festival a ceremony is performed called ‘Oni-Yarai’ at which people throw the legumes whilst shouting ‘Devils out! Good Luck in!’ 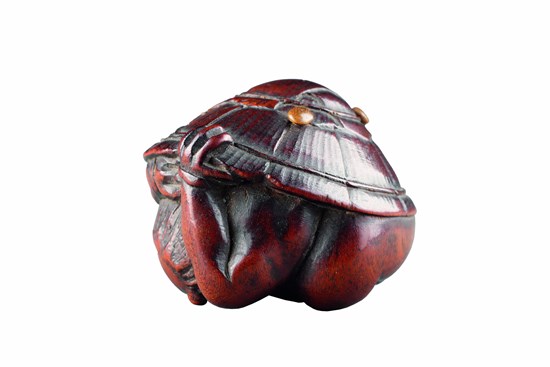 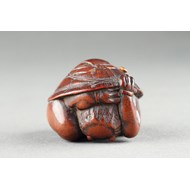 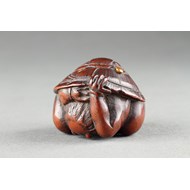 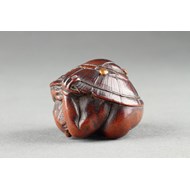 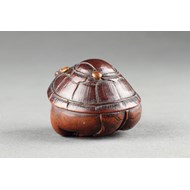 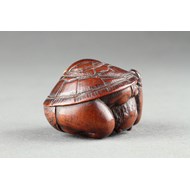 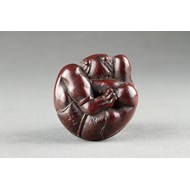 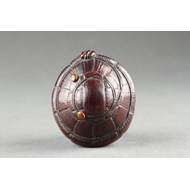 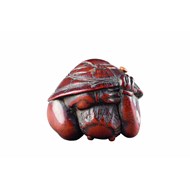 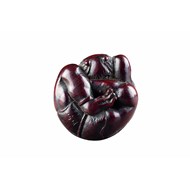 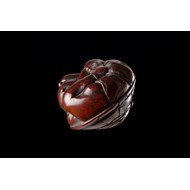 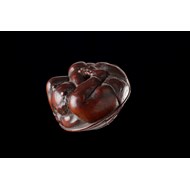