Caption Literature
A Rare Large Australian Northeast Queensland Aboriginal Rainforest Sword Club
19th Century
Size: 143cm long, 10cm wide - 56¼ ins long, 4 ins wide
Sword clubs used for fighting with intent to kill or maim opponents originated in the Cardwell and Bloomfield areas of North Queensland. Roth noted in 1910 (Vol III 210 pl. LXI fig 16) that clubs of this type were made on the Bloomfield River and were ‘always used with one hand stretched over the shoulder, the weapon hanging behind the back and brought forward from above down with a more or less sudden jerk; well directed, a blow from it can split a man’s skull’.
In 1875 Macleay’s ship, the ‘Chevert’ anchored off Cape Grenville in the far north of Queensland. The local aboriginal people, the ‘Wuthathi’ helped to renew the ships water supplies in return for food and European trade goods, with tobacco being regarded as the most important item of trade. For six days the ship remained at the Cape whilst Macleay’s zoologists assisted by local tribesmen collected specimens of the local indigenous fauna and flora, and various ethnographical artefacts. In August 1882 J.A. Boyd bought a shield and a spear for half a pound of tobacco, twelve shillings and eight pence. 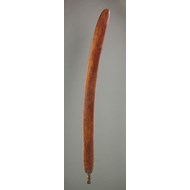 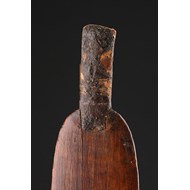 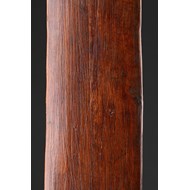 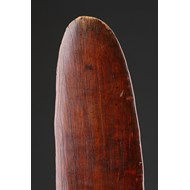