Caption Literature
A Collection of Three Kayan and Kenyah Dyak East Kalimantan Indonesia Mens Earrings Carved in Relief from the Beak Crest of a Rhinoceros Hornbill (Buceros Rhinoceros)
A.
An Earring Carved in the Round with a Double Headed Dragon or ‘Aso’ a Powerful Mythological Protective Force Worn by Headhunters
B.
A Plain Unadorned Earring Carved from the Large Crest of a Rhinoceros Hornbill
C.
An Earring Carved with Traditional Foliate Scroll Motifs Representing a Hunting Dog
19th Century
Sizes: A&B: each: 7.5cm high, 3.5cm wide, 2cm deep - 3 ins high, 1½ ins wide, ¾ in deep / 11cm high - 4¼ ins high (on base)
C: 5cm high, 4.5cm wide, 2cm deep - 2 ins high, 1¾ ins wide, ¾ ins deep / 9.5cm high - 3¾ ins high (on base)
The Rhinoceros Hornbill is a word that has special significance for the Kayan and Kenyah Dyak people of Borneo playing a central role in most of their creation myths by symbolising the giving of life, and as a henchman of their vociferous gods helping to wreck havoc on their enemies. Warriors, headhunters and men of rank wore earrings cut from the upper crest of the beak of the Hornbill to enhance their attractiveness and to proclaim their skills and status. The highest status was reserved for those leaders who led war expeditions and hunted heads in areas never before occupied by the Dyak.
Regarded as savage and cannibalistic by Europeans in the mid 19th century, the Dutch colonial government in Borneo curtailed Dyak traditional activity mainly by means of missionary conversion to Christianity. However, headhunting resurfaced in the mid 1940’s when the Allied Powers encouraged the practice against the Japanese occupation of Borneo. 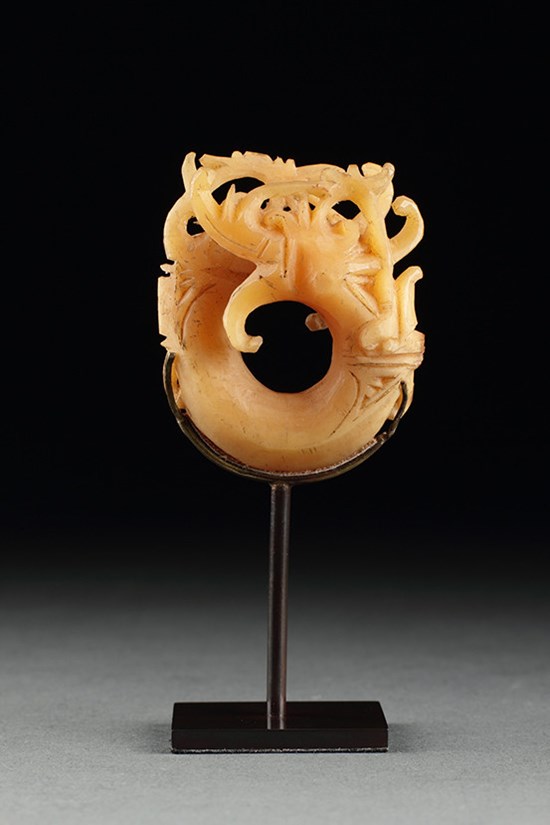 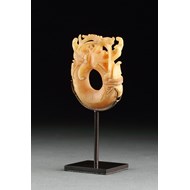 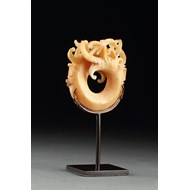 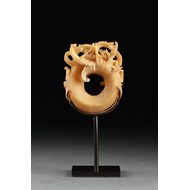 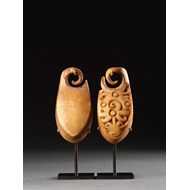 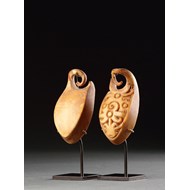 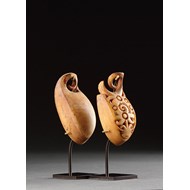 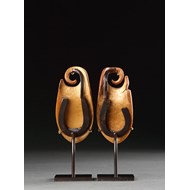