Caption Literature
A Fine Japanese Ivory Okimono of a Family of Rats Feasting on Bean Pods
Their eyes inlaid with horn their fur partly stained
Unsigned
Meiji Period / Late 19th Century
Size: 2.5cm high, 5.5cm wide, 3.5cm deep - 1 ins high, 2¼ ins wide, 1¼ deep
Rats are the messengers of Daikoku the god of worldly prosperity. His rats should be looked upon as a warning against carelessness in protecting material possessions. In Japanese legend the other gods became jealous of Daikoku when they saw how the people brought him offerings praying for prosperity. They wanted to get rid of him and asked Emma-O, the King of Hell to send his slyest demon, Shiro, to kill him. The demon found Daikoku sitting on rice bales in a barn, but the god heard his footsteps and sent his chief rat to see who was there. When the rat discovered Shiro, he fetched a branch of holly and attacked the demon with this prickly weapon and chased him back to the portal of hell. 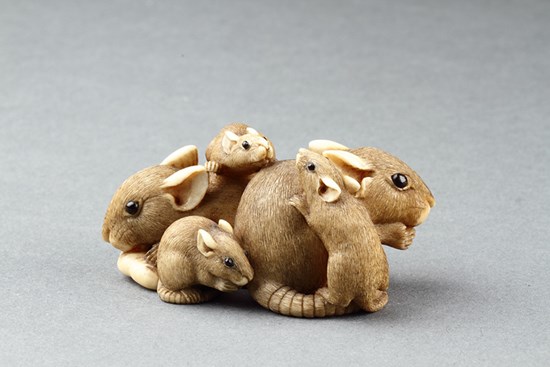 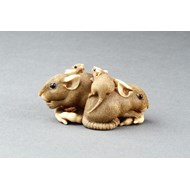 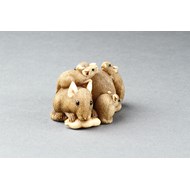