Ancient Roman Marble Head of the Goddess Athena or Minerva

Caption Literature
An Ancient Roman Marble Head of the Goddess Athena or Minerva
Wearing her attribute of the Corinthian Helmet
Perhaps from a relief on a sarcophagus
2nd Century AD
Size: 12.5cm high, 10.5cm wide, 9.5cm deep - 5 ins high, 4 ins wide, 3¾ ins deep / 21cm high - 8¼ ins high (with base)
Generally regarded as the goddess of war Athena / Minerva appears in myth to be the true friend of all bold warriors such as Perseus, Heracles and Odysseus. She is connected with her father Zeus in the ability to send storms and bad weather, but her courage is a wise courage and so she is represented as a protector and defender. She presides over the whole moral and intellectual side of human life and thus represents wit and intelligence. From her are derived all the productions of wisdom and understanding, every art, craft and science whether of war or of peace. Importantly to both the Greeks and Romans she was also a goddess of victory, and as ‘Athene Nike’ she had a special temple on the Acropolis where a 30 metre high statue in ivory and gold, now lost, once presided.

Ancient Roman Marble Head of the Goddess Athena or Minerva 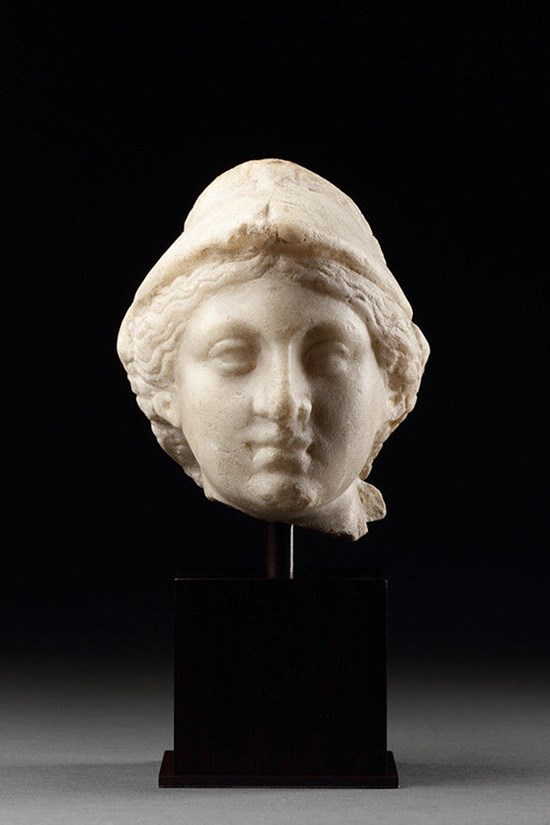 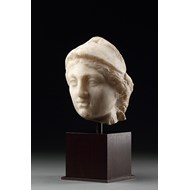 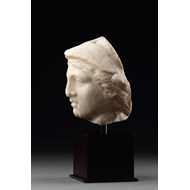 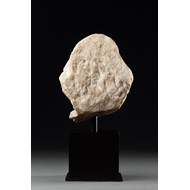 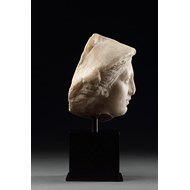 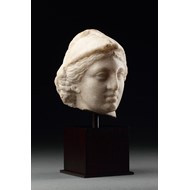