Caption Literature
A North American Finely Engraved scrimshaw Sperm Whale Tooth Depicting Naval Engagements on Lake Erie during the War of 1812 decorated with flying fish doves a whale and an American House and Church inscribed with the legend: ‘Commodore Oliver H Perry Victory over the British Fleet on Lake Erie on the 10th September 1813’ surrounded by leafy flowering tendrils
Superb golden colour and patina
Circa 1816 - 1830
Size: 9cm high, 19cm wide, 4.5cm deep - 3½ ins high, 7½ ins wide, 1¾ ins deep
Weight: 703 grams - 1.55 lb’s
The Naval battle on Lake Erie on September 10th, 1813 was one of the biggest naval battles of the war of 1812. Fought off the coast of Ohio, it is sometimes called the Battle of Put-in Bay and under Commodore Oliver Hazard Perry nine vessels of the U.S Navy defeated and captured six vessels of the British Royal Navy which ensured American control of the lake for the rest of the war. These scenes were copied by the scrimshanders from illustrations in Abel Bowen’s ‘Naval Monument’ a profusely illustrated popular compendium of heroic yankee naval anecdotes from the war of 1812 that appeared in a least three cheap editions between 1816 and 1837. 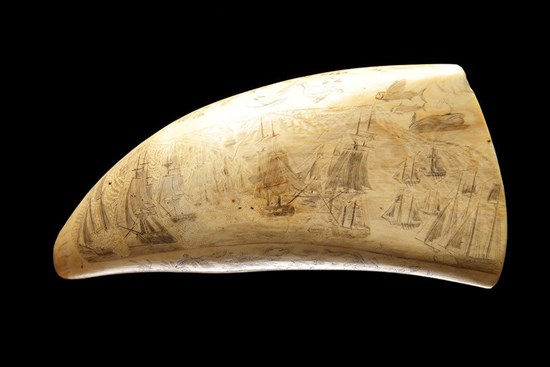 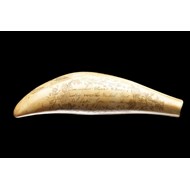 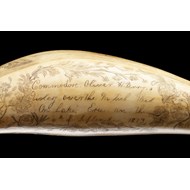 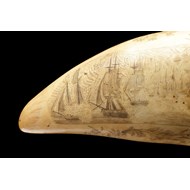 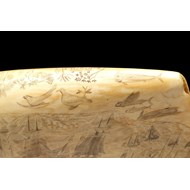 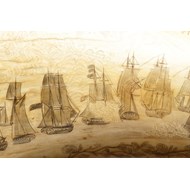 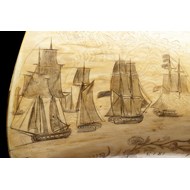 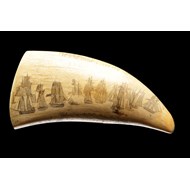