Caption Literature
A Fine French Napoleonic Prisoner of War Carved Ivory Snuff Box Modelled as a 12 Gun Fighting Sloop
The one piece hull carved with canon emerging from their ports the lid formed as the main deck carved with an anchor and oars stowed within a coiled length of rope the lid pull as a capstan with silver hinge a detailed figurehead of a lion rampant retained with silver brackets
Mounted on ivory display stand
The underside of the lid marked in ink ‘1089’
Late 18th – Early 19th Century
Size: 3.5cm high, 14cm long, 4cm deep - 1¼ ins high, 5½ ins long, 1½ ins deep
5cm high - 2 ins high (with base)
The Frenchman taken captive by the British during the Napoleonic Wars of 1792-1815 were incarcerated in the hulls of decommissioned naval warships in the harbours and estuaries around the coast of Britain. Stripped of all masts, rigging, sails and embellishments these hulks held captive unknown French craftsmen who, attempting to overcome the wretchedness of their cramped, confined and sordid conditions, patiently produced with primitive tools and materials, accomplished works of art. These models were not meant to be accurate portrayals of any particular vessel, but were intended as mementoes. Mostly made of scrap animal bones, it is rare to find an example in ivory. 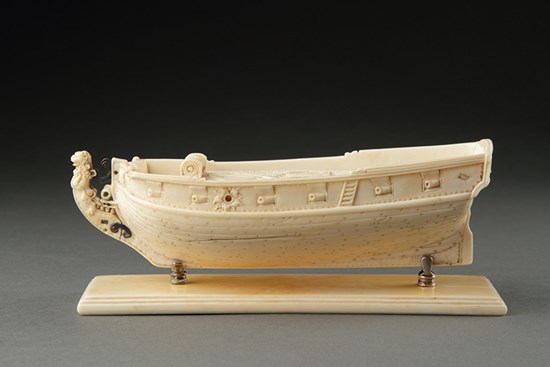 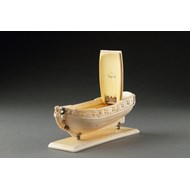 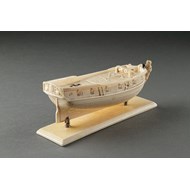 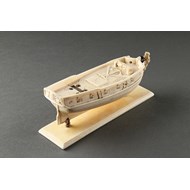 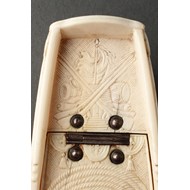 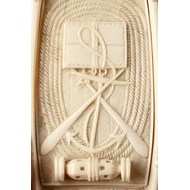 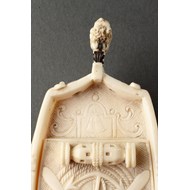 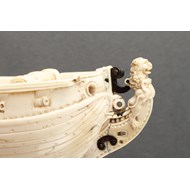 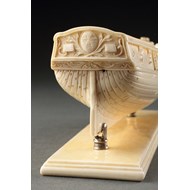 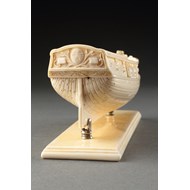 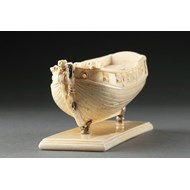