Victorian Diorama Displaying a Specimen of a European Hornets Nest

Caption Literature
A Victorian Diorama Displaying a Specimen of a European Hornets Nest ‘Vespa Crabro’
19th Century
Size: 48.5cm high, 25.5cm wide, 13.5cm deep - 19 ins high, 10 ins wide, 5¼ ins deep
Feeding on nectar and sugar-rich plant foods, large hornets will also actively attack and kill honey bees and raid the hive for its honey and brood causing havoc and devastation. At the end of the summer they will often fly into orchards to feed on overripe fruit. Gnawing a hole into the fruit they immerse themselves in the soft sugary pulp.
The nest is made in the Spring by a queen, a fertilised female, usually in a dark sheltered place such as a hollow tree trunk. She builds a series of cells out of chewed papery bark into which she lays an egg. The larva hatches after five days and is fed a protein rich diet of insects by the queen. It then goes through a period of metamorphosis and is transformed into an adult female worker. The first generation always consists of female workers who undertake all the tasks of nest building, foraging and caring for the brood which were previously the tasks of the queen who will now only perform her exclusive job of egg laying. Fertilised eggs develop into females and unfertilised ones become male. Known as ‘drones’ they do not participate in the maintenance of the nest or foraging. In early Autumn they leave the nest and mate during ‘nuptial flights’ and die shortly afterwards. The workers and queens survive until late Autumn. Only the newly fertilised queens will survive over the Winter.

Victorian Diorama Displaying a Specimen of a European Hornets Nest 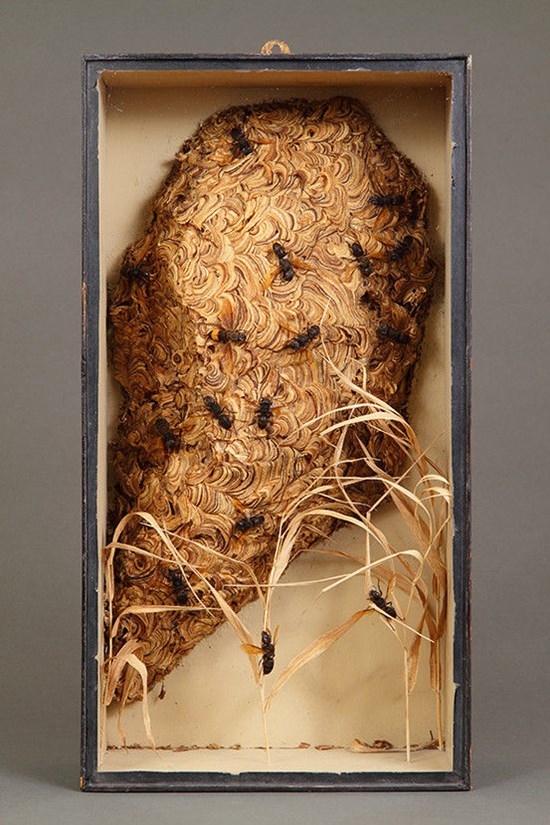 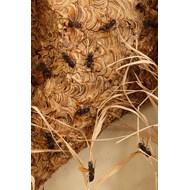 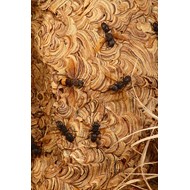