Caption Literature
An Ancient Central Indian Madhya Pradesh Buff Sandstone Shrine a Model of a Sacred Temple ‘Shikhara’ Guarded by a Pair of ‘Makaras’ with a Musician and Dancing Female Attendant Issuing from Their Mouths
10th - 11th Century AD
Size: 41.5cm high, 40cm wide, 21cm deep - 16¼ ins high, 15¾ ins wide, 8¼ ins deep
Although the ‘Shikhara’ or convex sided temple tower is primarily a northern architectural feature there is one very similar to this model at a site of nine Shiva temples of Alampur, Andhra Pradesh which was built during the 7th and 8th centuries.
The door guardians, ‘Makaras’ are fantastical mythical aquatic creatures that combine the body of a crocodile with the head of a lion and the trunk of an elephant. An ancient symbol in India they are considered by the Hindu’s to be auspicious and purifying. Related to a fertility cult the ‘Makara’ is the vehicle of ‘Varuna’, god of the waters of heaven and earth and is the emblem of ‘Yama’, the god of love. The combination of a beautiful jewelled, near naked swaying woman and a musician with sharply incised detail of costume issuing from the mouths of the Makaras portrays an image of pronounced sensuality, and ensures a protective auspiciousness for the small shrine. 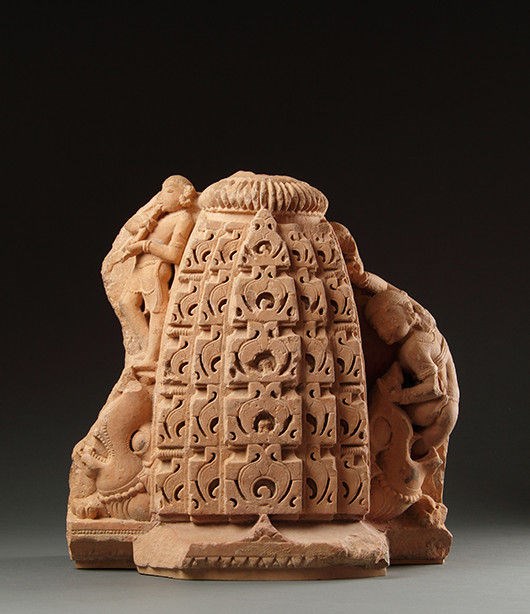 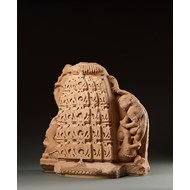 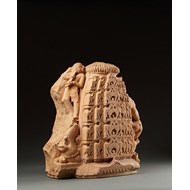 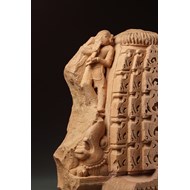 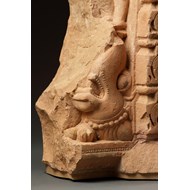 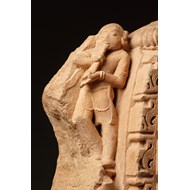 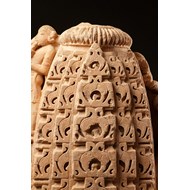 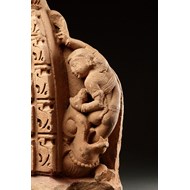 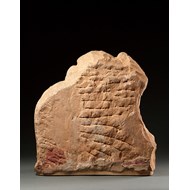