Caption Literature
A Rare Early Christian Carolingian Frankish Fragment of a Dedicatory Limestone Relief Plaque a Latin inscription to the edge reading: ‘â€¦.. Cavit Fieri Ista Opera Indignos Peccat (Or)â€¦..’ ‘This Unworthy Sinner (Has Made Sure) That This Work Has Been Done’
8th - 9th Century AD
Size: 41.5cm high, 98cm wide, 11cm deep - 16¼ ins high, 38½ ins wide, 4¼ ins deep / 47cm high - 18½ ins high (with base)
cf: M.Buis ‘La Sculpture A Entrelacs Carolingienne Dans La Sud-Est De La France' Aix-En-Provence 1975 Vol I, pg. 226-232
This type of interwoven decoration is a recurring motif in Carolingian art found in South East France which was part of the empire created by the great Charlemagne, King of the Franks (768-814), who in alliance with the Pope extended his dominion over Germany and Italy. He created an empire by conquering and Christianising the Saxon, Lombards and Avars, and by restoring areas of Italy to the Pope. His coronation by Pope Leo III in Rome on Christmas Day 800AD is taken as having inaugurated the Holy Roman Empire (800-814). He gave government a new moral drive and religious responsibility, and encouraged commerce and agriculture. A well-educated man he promoted the arts and education and under Alcuin his principal court at Aachen became a major centre of learning. The political cohesion of his empire did not last, but the influence of his scholars persisted in the Carolingian Renaissance. 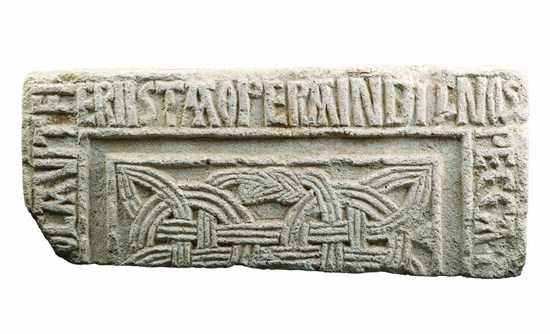 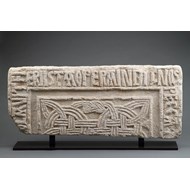 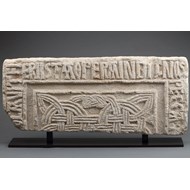 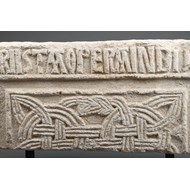