Caption Literature
A New Zealand Maori Sickle Shaped Whalebone Short Hand Club ‘Wahaika’ an open worked ‘Tiki’ image carved to the side the butt with open-worked ‘Manaia’ face
First Half 19th Century
Size: 28cm long, 9.5cm wide - 11 ins long, 3¾ ins wide
Three types of short hand club made from whalebone were used by the Maori in traditional warfare. The ‘wahaika’ has a form which is said to resemble a sickle with the distinctive feature of a small human image or ‘tiki’ carved to the side. This club appears to have developed from the ‘Kotiate’ when one of its lower lobes was carved into a human image. This tiki added ‘mana’ or power to the weapon making it more effective in use.
Whalebone, the panbone or lower jaw of the sperm whale, was a favoured material for war clubs because of its strong texture and crisp designs could be carved on it. Whales were always valued as an abundant source of meat, teeth and panbone. Pre-contact, the Maori had no means of hunting whales and would wait for them to become stranded on beaches which was a seasonal occurrence. Magical amulets were used to bring the whales ashore in the form of ‘mauri’. 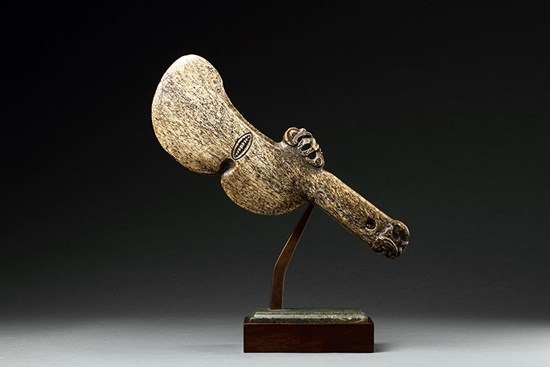 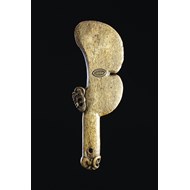 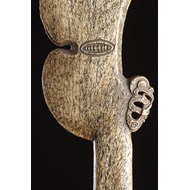 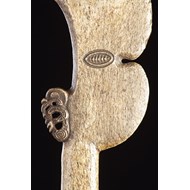 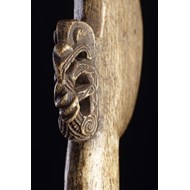 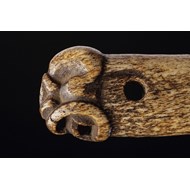 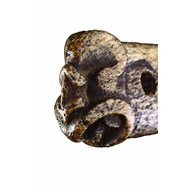 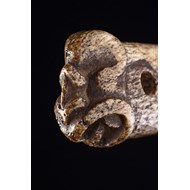