Caption Literature
A Rare Group of Five Ancient Romano-Celtic Enamelled Bronze Chariot Wheel Mounts the Discs Retaining Original Bronze Fixings to the Reverse
1st Century BC - 1st Century AD
Size: 9.5cm dia. - 3¾ ins dia. (min) / 14cm dia. - 5½ ins dia. (max)
The use of chariots, horses and the necessary accoutrements were of great importance in Celtic society. Harness and chariot fittings in bronze or iron were richly decorated and sometimes inlaid with brightly coloured enamel such as these five are. The archaeological evidence for chariots is comprised of the metal pieces found of the vehicle in grave contexts or votive deposits as the wood body and leather-trappings usually disintegrate.
A chariot wheel of the 2nd century BC found at Holme Pierrepoint in Nottinghamshire has six sections, with two of the 12 spokes in each, kept rigid by means of an iron tyre which has been shrunk around the wooden frame. The wheels were attached to the axle of a chariot by disc shaped linchpins made of bronze or iron, and like these examples, sometimes were decorated with enamel. The use of green, blue, red and yellow enamel was found on horse fittings from Westhall in Suffolk, and is said to have been popular as decoration in the territory of the Iceni. Chariots, apart from war, were also used as funerary carts and the rich ornamentation of these particular wheel mounts would suggest that they are perhaps from the votive funerary trappings of a high ranking individual. 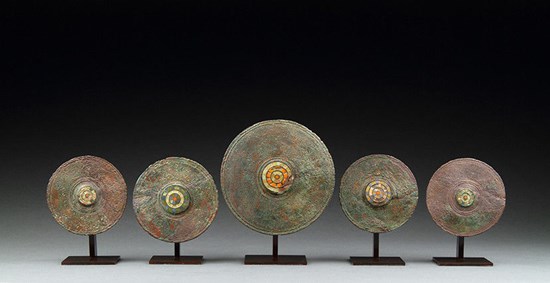 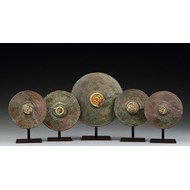 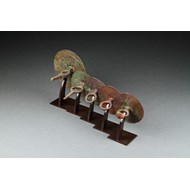