Italian ‘After The Antique’ Bronze of Arrotino

Caption Literature
An Italian ‘After The Antique’ Bronze of Arrotino or the Blade Sharpener on Sienna Marble and Bronze Plinth
Early 19th Century
Size: 17cm high, 17.5cm wide, 10cm deep - 6¾ ins high, 7 ins wide, 4 ins deep
Known also as the Scythian or ‘Il Rotatore’ this figure is thought to be from a group representing Apollo Flaying Marsyas. It was excavated in the early 16th century and is a Roman 3rd century BC marble of an earlier Hellenistic model. The sculpture appears in an inventory of 1520 of the Villa Farnesina after the death of Agostino Chigi. It was later sold by a member of the family to Cardinal Ferdinando de Medici and removed to the Villa Medici where it remained on display until it was taken in the 18th century to the Medici Collection in Florence. It is today in the Tribuna of the Uffizi in Florence.
Whilst in the Medici collection the executioner or ‘Villano’ was reinterpreted as a Scythian, and sometimes he became ‘The Listening Slave’ a royal barber or butler overhearing treasonous plotting against the state. In the late 17th century it was recognised as having been part of a larger Hellenistic group by scholars identifying the theme in antique engraved gem stones.
For a long time the sculpture was thought to be one of the finest surviving Greek marbles, and as such many copies in plaster were made for instruction. A life sized cast was made for the R.A. that can be seen in the Courtauld Gallery. It became a popular grand tour subject in the 18th and 19th century and bronze reductions were made to illustrate the ancient Greek ideal.

Italian ‘After The Antique’ Bronze of Arrotino 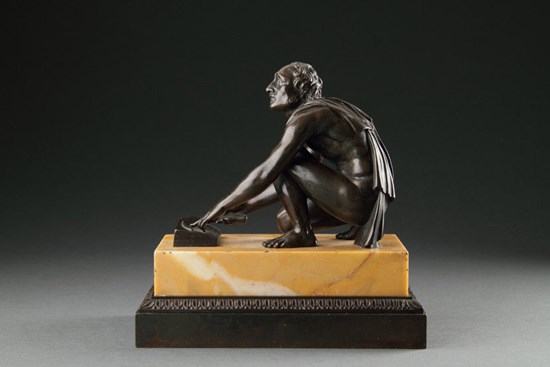 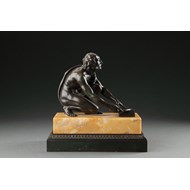 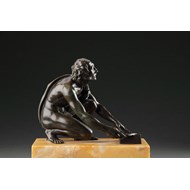 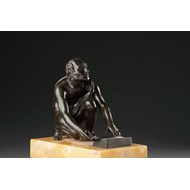 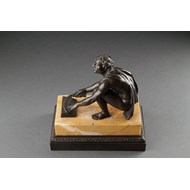 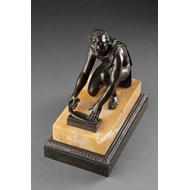 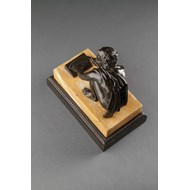