Caption Literature Exhibition
A Native American Northern Plains Blackfoot Beaded Pipe Bag of Native Tanned Buckskin the Top Shaped in Two Semicircular Flaps with a Single Bead Edging a Central Rectangular Beaded Area Slightly Differing on the Front and Reverse in a Typical Blackfoot Checkerboard Design the Bottom of the Bag Fringed and Wrapped with Brass Beads
Circa 1840 - 1860
Size: 67cm long, 14cm wide - 26½ ins long, 5½ ins wide
The Blackfoot lived around the upper basin of the Missouri river, a loose confederacy of three tribes. The Plains Indians were always nomadic, but after the introduction of the horse this shifting and spreading of their territories greatly intensified. To Europeans, the Plains tribes epitomised the ‘Wild Indian’ with their buffalo hunts, scalp locks, flying shields and war dances. With their action-packed and dangerous way of life they seemed untamed and romantic, but they thought of themselves as hunters, practical men, their nation well adjusted to living in an economy which dictated small and far-flung communities.
No band or group was tied to a particular village or hunting ground. The Plains Indian's home was space, the earth to them was a total environmental unit. In order to cope with this freedom there existed a strong leadership and military discipline. Societies were formed that had ceremonies designed to benefit everyone. They created a highly regimented society with a complicated system of honours and rewards which aimed to dispel the tensions between freedom and responsibility. Beautifully crafted pipes and pipe bags, scalp fringed war shirts, eagle feather bonnets and ceremonial horse trappings were all symbols of authority and supernatural power, they were tribal embodiments of prestige long before they were works of art. To the Native Americans their artefacts were evidence of their fragile relationship with space, the creator and with their disciplined world.
NOW SOLD
Similar items required for stock - please contact with details 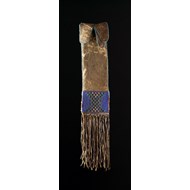 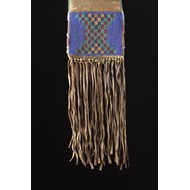 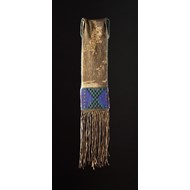 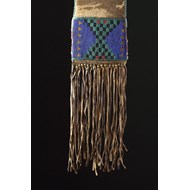