Caption Literature
Three Interesting English Naive Portraits of the Woodthorpe Brothers
William Cobbold Woodthorpe (1791-1860)
Captain John Bolton Woodthorpe R.N. (1796-1846)
Edward Woodthorpe (b. 1800 - d. ?)
Attributed to John Bolton Woodthorpe
Oils on Panel
One Inscribed to Reverse ‘William Cobbold Woodthorpe in Hudson Bay Coat About 1815’
The Other ‘John Bolton Woodthorpe R.N.’
Circa 1815-1830
Size: 31cm high, 24.5cm wide - 12¼ ins high, 9¾ ins wide
37cm high, 32cm wide - 14½ ins high, 12½ ins wide (framed)
a. The portrait of William Cobbold Woodthorpe (1791-1860) shows him with a snowshoe, an Indian pipe of peace and wearing a Cree Métis embroidered moose skin great coat. This magnificent coat is now in the collections of the University of Cambridge Museum of Archaeology and Anthropology. It was collected by Woodford whilst working in Canada for the Hudson Bay Company as a fur trader in the early 19th century. In 1841 he returned home to the family farm in Aveley, Essex bringing his coat with him.
Prominent travellers such as The Marquis de Lafayette, Duke Paul Wilhelm of Wí¼rttemberg and John Audubon also returned home with examples of these splendid coats. Made on the Upper Missouri River of moose or elk skin, and decorated with multi-coloured porcupine quillwork, they were popular among the ‘mountain men’ engaged in the fur trade. Métis women, of mixed French-Canadian descent produced the embroidered coats and traded them at annual fairs at Fort Pierre and Fort Union in the early 19th century. Their Cree and Ojibwa ancestors living by the Red River in Manitoba made long coats decorated with painted designs and loom woven quillwork. The girls of the Métis were taught at mission schools where they became familiar with European floral embroidery. This influenced them to develop a curvilinear style that in combination with Native geometric designs was to become the recognisable hallmark of Métis art.
The mixed ancestry of the Métis and their expertise as hunters and trappers made them useful as intermediaries between the Indians and the trade companies. After 1850 the fur trade moved away from the Missouri River and many Métis were assimilated into the regional Indian population.
â€¨
b. This portrait shows Lieutenant (later Captain) John Bolton Woodthorpe R.N. (1796-1846) in naval uniform wearing a dress sword, a small telescope in his hand with a ship at sea in the background. Joining the navy in 1809 he became a lieutenant in 1826, Commander in 1828 and Captain in 1842. He is known for his watercolours, some of which are in the Pitt Rivers Museum in Oxford, and for his naval journal.
â€¨Aboard the HMS Briton, a fifth rate frigate commanded by Sir Thomas Staines, he recorded the rediscovery of Pitcairn Island on the 17th September 1814. His naval log for 1814 to August 16 1815 details the voyage from Chile northward to Peru, and on the islands of Galapagos, Easter and Pitcairn, where they ‘found the Island inhabited by the descendants of Mr F. Christian and Mutinous Crew of the Bounty settled here in AD 1788’. Woodthorpe illustrated his journal with watercolours of the Island coasts, and with charts and harbour plans, one of which shows the harbour of ‘Tihuoy’ in the island of Nooaheevah of Sir Henry Martin’s Marquesas.
Two warships, HMS Briton and HMS Tagus, visited Pitcairn in 1814 and Woodthorpe records that both the Captains were impressed by the mutineer John Adams and the simplicity of the life that the community led. Adams was regarded as a religious leader who set examples for the islanders to live by. The English Captains decided that it would be ‘an act of cruelty and inhumanity’ to arrest him. He was left on the Island, the last survivor of the Mutiny on the Bounty whilst the ships and Woodthorpe sailed away, but having been rediscovered, the isolation of the Island was over forever.
â€¨c. Edward Woodthorpe (born 1800) in his portrait is seated with his spaniel, a rifle and game on a shelf. He is shown in the guise of an English gentleman farmer and most probably ran Fanns Farm, the family farm of 260 acres in Aveley, Essex. His parents, Thomas and Dorothy Woodthorpe, had five sons of whom Edward was the youngest.
â€¨ 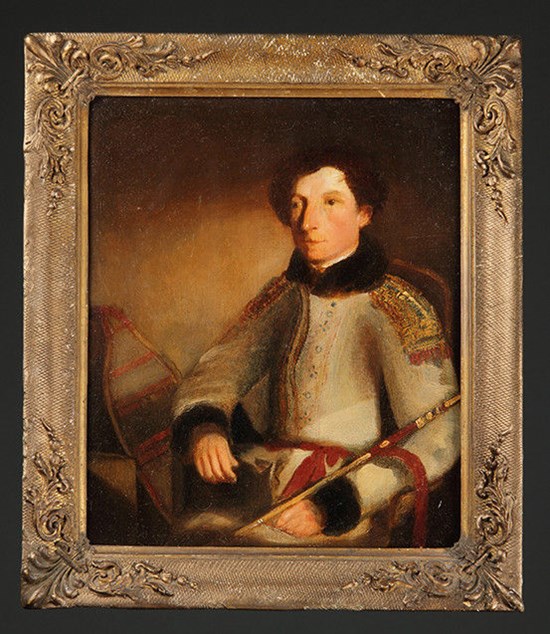 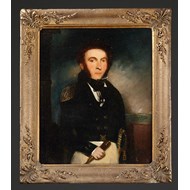 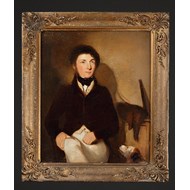 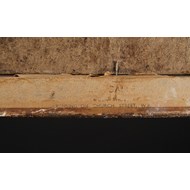 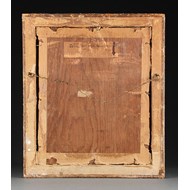 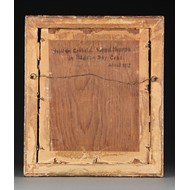 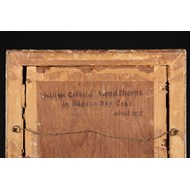 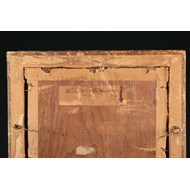