Caption Literature
A Rare and Interesting Early English Carved Boxwood Cane or Ceremonial Staff Handle the Top Dated 1698 the Sides Decorated with a Scene of Adam and Eve in the Garden of Eden and with a Scene Depicting a Masonic Ceremony with Numerous Masonic Symbols the Initials ‘TG’ Carved to the Collar
Late 17th Century
â€¨Size: 11.5cm high, 4.5cm dia. (max) - 4½ ins high, 1¾ ins dia. (max)
The interesting carved scene on this staff probably portrays the initiation of a candidate into a lodge of adoption. The masonic symbol of the ancient Egyptian crook or ‘Heka’ above the initiates head was the sceptre used by the Egyptian pharaohs to signify government. The two figures stand between the pillars of Hercules above which are carved symbolic mathematical and architectural emblems.
Much of masonic symbolism is mathematical in its nature and consequently attracted many 18th century rationalists and humanists, such as Mozart whose opera the ‘Magic Flute’ makes extensive use of masonic symbolism, and Voltaire, Goethe, Benjamin Franklin, George Washington, Mark Twain and many others. No one particular metaphysical theory is advanced and in keeping with the geometrical and architectural theme of Freemasonry, the supreme being or creative principle (God) is referred to in masonic ritual as the Grand Geometer or the Great Architect of the Universe.
The oldest jurisdiction in the English branch of Freemasonry is said to be the Grand Lodge of England which was founded in 1717. This staff is therefore an extremely early example of English masonic art. 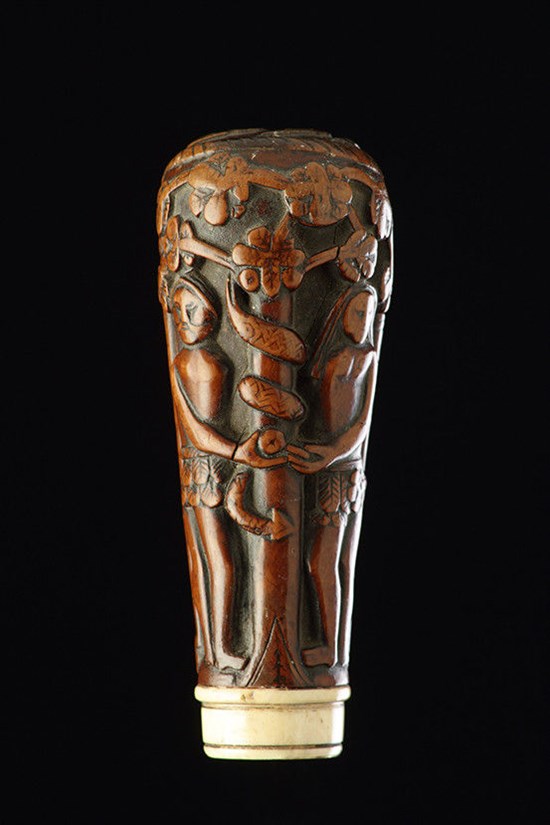 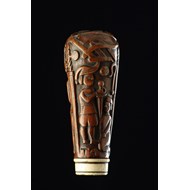 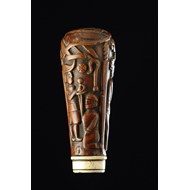 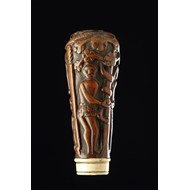 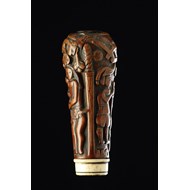 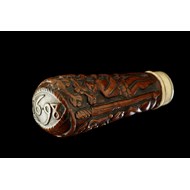 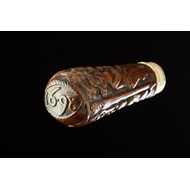