Caption Literature
A South Australian Aboriginal Returning Hunting Boomerang an:
Old Paper Label Attached Inscribed: ‘Made by the Natives of South Australia Bought Home by H.R.H. The Duke of York’
Old Smooth Dry Patina
Mid 19th Century
SIZE: 54cm wide – 21¼ ins wide
In 1901 Albert Edward, then Prince of Wales planned a tour of the Empire with his wife Alexandria, but the death of his mother Queen Victoria on 22nd January 1901 meant that preparations were made for the Coronation in 1902 instead. Consequently Edward VII’s son Prince George, Duke of Cornwall and York and his wife Mary of Tech were consigned to undertake the voyage. Arriving in Albany in Western Australia they sailed to Melbourne and there opened the first Australian federal parliament. They then travelled to Sydney by train. The Duke of Cornwall and York later became King George V and his son Edward; Prince of Wales also visited Australia in April 1920 to thank them for their participation in WWI.
Three ancient boomerangs were recovered from a South Australian peat quarry and dated to 8th Century BC, which suggests that the Aboriginal boomerang is the oldest in the World. The lighter returning boomerangs such as this example with thin broad blades and a sharp ‘elbow’ were used for hunting water birds on the lakes and waterways of South Eastern South Australia, Southern New South Wales and Victoria. When thrown low over waterfowl at streams or swamps the shadow of the boomerang resembles that of a swooping hawk serving to scare the birds to fly into prepared nets.
The carving of boomerangs was exclusively a male activity and before the advent of plentiful metal tools, they were cut using stone axes and adze and then finished with a stone or shell scraper. The subtle variation in size, form and decoration of Australian boomerangs mirrors the social and physical diversity of the Aboriginal people across the Country. 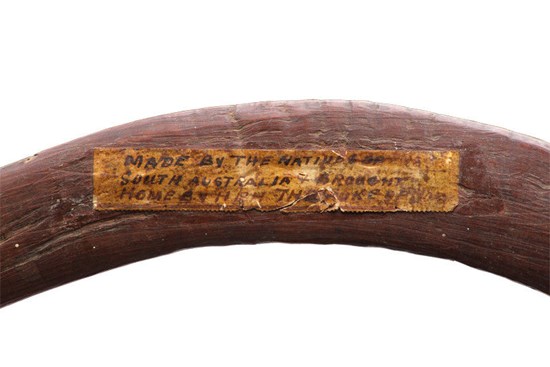 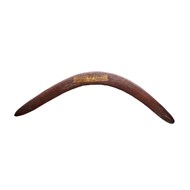 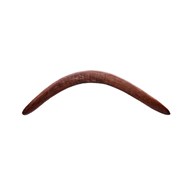 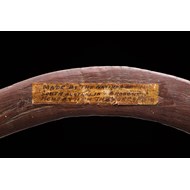 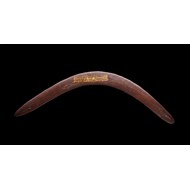 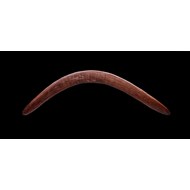