Caption Literature
A Napoleonic French Prisoner of War Carved Bone Games Box
Decorated with 14 Water Colour Panels of Urns of Flower, Figures, Buildings and Landscapes
The sliding lid flanked by a cribbage board revealing an interior divided for a set of dominoes and for a painted set of bone playing cards
An ink inscription underneath reading ‘Tourny’
Late 18th – Early 19th Century
SIZE: 9cm high, 26.5cm long, 10cm wide – 3½ ins high, 10½ ins long, 4 ins wide
No record of life as a Napoleonic prisoner of war in the purpose built Depot at Norman Cross in Cambridgeshire is known to exist, although an interesting collection of their carved bone works of art can be seen in the little known city museum in nearby Peterborough. The Depot received its first inmates in 1797 and was for many years the only prison specifically constructed for the custody of captives from the Revolutionary and Napoleonic wars. Dartmoor was also built for the same purpose, but was not occupied until 1809. It became a convict prison in 1850 and is today still used as such. 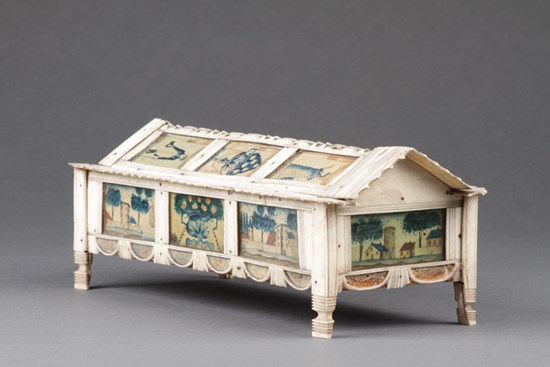 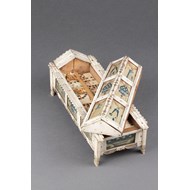 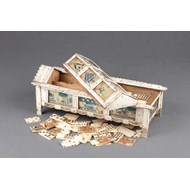