Caption Literature
A Fine Victorian Cased and Mounted Collection of Australian Birds by James Gardner of London including a Laughing Kookaburra a Pied Nutmeg Pigeon a Green Nutmeg Pigeon an Australian King Parakeet a Bee Bee Parrot a Mistletoe Bird a Regent Bowerbird a Yellow Tailed Diamond Bird a Variegated Wren and an Emu Wren
A large Trade Label to the reverse for James Gardner of Oxford Street, London, and a smaller Gardner Trade Label to the interior
James Gardner Exhibited at the 1851 Great Exhibition and styled himself ‘Taxidermist to the Royal Family’
Mid 19th Century
SIZE: 82cm high, 53.5cm wide, 27.5cm deep – 32¼ high, 21 ins wide, 10¾ ins deep
SEE: Finch & Co catalogue no. 17, item no. 1, for a Victorian cased collection of Australian Parrots by T.M. Williams
The kookaburra is an intriguing member of the kingfisher species that feeds on snakes and lizards. It is sometimes called the ‘laughing jackass’ in Australia as it has a weird laughing cry which is strangely human in aspect, very loud and disturbing and even alarming to the uninitiated. A group of them will raise a wild chorus of crazy laughter as they go to roost in the treetops at dusk and again wake everyone within hearing distance just as dawn breaks. They perform this ritual so regularly that in the outback of Australia they are known as the ‘bushman’s clock’.
Britain in the 19th century was a major focus for the development of the art of taxidermy and the science of natural history. Today it seems to have become largely forgotten, no longer an ‘art’ and disregarded as an educational tool in zoological study, it is often neglected as a part of the nation’s cultural heritage. 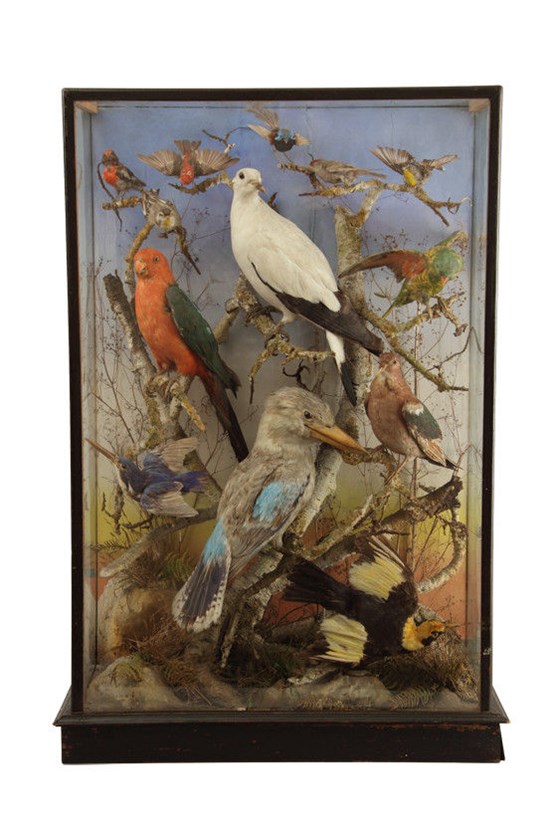 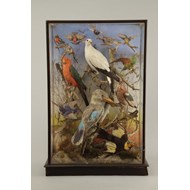 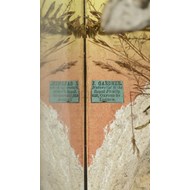 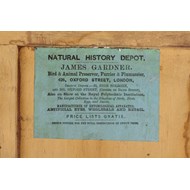 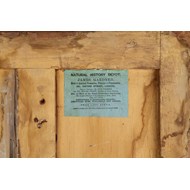