Caption Literature
An Italian Renaissance Table Cabinet of Ebony and Ivory
The two doors with ivory panels engraved with portraits of the Roman Emperor’s Vespasian and Nero opening to reveal a drawer lined interior
Probably Naples
17th Century
SIZE: 47cm high, 64cm wide, 30cm deep – 18½ ins high, 25¼ ins wide, 11¾ ins deep
The art of ebony veneering and ivory engraving seems to have been brought to Italy by German and Netherlandish emigrant craftsmen. In 1569 in Spanish ruled Naples a contract was signed by Giovanni Battista de Curtis described as an ‘intarsiatore in avolio’, an ivory engraver, and Giacomo Fiammingo, a ‘scrittorista’, a cabinet maker, for the making of two cabinets in ivory to be adorned with engraved designs based on Ovid’s Metamorphoses. Contemporary engravings inspired the designs of the ivory plaques and the combination of ebony and ivory to produce an austere black and white colour contrast reflected the fashion in contemporary Spanish court dress, which had become popular throughout Europe.
Cabinets were used for display and storage, but cabinets like these also became imbued with status and a distinct message. They became the ultimate miniature ‘wunderkammer’ enclosing works of art and curiosities, a reflection of the whole known world, in a princely and courtly setting. 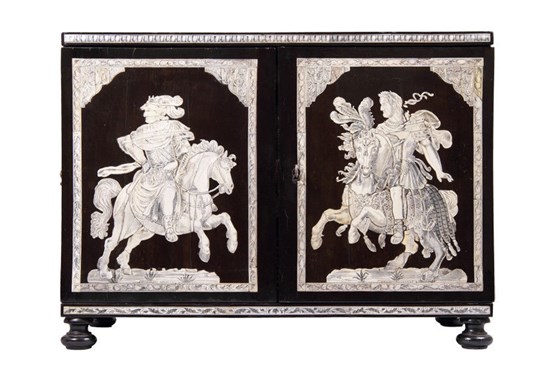 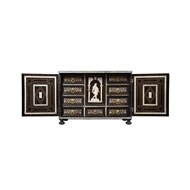 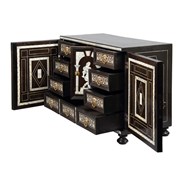 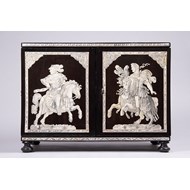 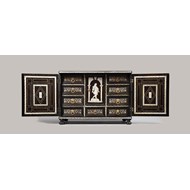 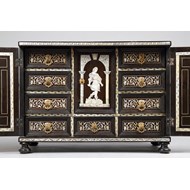 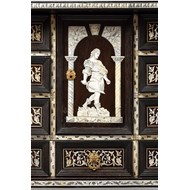 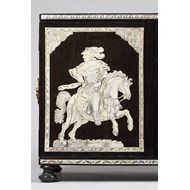 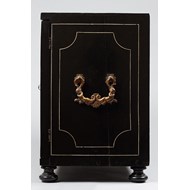 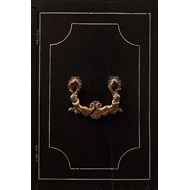 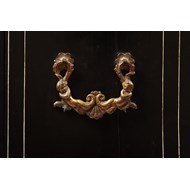 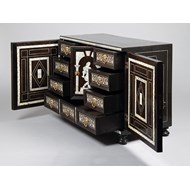 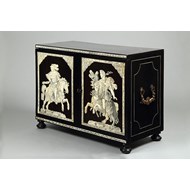