Caption Literature
A Papua New Guinea Western Highlands Wahgi Man’s Ritual Dance Headdress
Made of the Casques of Three Great Hornbills ‘Buceros Bicornis’ surrounded by fibre and raffia stalks
1st half 20th Century
Size: approx: 38cm high, 62cm wide, 32cm deep – 15 ins high, 24½ ins wide, 12½ ins deep / 67cm high – 26½ ins high (with stand)
The Great Hornbill is an enormous bird with unique nesting habits living in monogamous pairs in the dense forests of Papua New Guinea. They are regarded with superstitious awe and are used in ceremonies and rituals as symbols of purity and marital fidelity.
Body adornments and headdresses are as varied as the cultures of New Guinea. Men express status and prestige by their wearing of adornments. Perishable arrangements of seeds, leaves, flowers, stalks and pods were all used for special occasions and which seemed to fuse with face paint, feathers, fur and shell into human works of art. Permanent body decoration in the form of scars and tattoos were also used to set off the displays of ‘found objects’, materials not traditionally considered decorative, but declared to be so because they were unusual or rarely found, and would make the dancer stand out from the crowd. All parts of the body are decorated and all accessories are combined with elaborate arrangements of hair and feathers to emphasise the size and physical profile of the men who wear them. 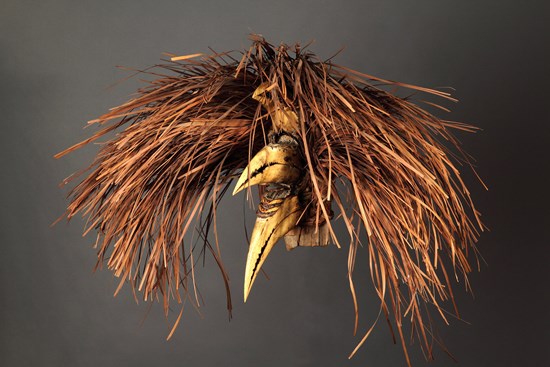 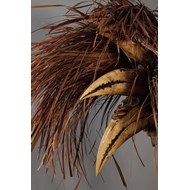 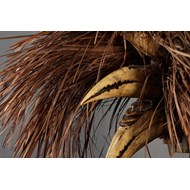 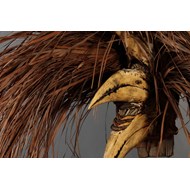