Caption Literature
A South African Transvaal Ntwane / Pedi Wooden Staff
The figurative handle with metal inlaid eyes a pokerwork open mouth and scarification to each cheek wearing a distinctive male initiates mud coiffure
19th Century
Size: 90cm long – 35½ ins long
The Ntwane originally lived in what is now Botswana. In 1903 they relocated to the Mpumalanga province of South Africa and subsequently became closely associated with the Pedi with whom they shared various traditions of costume and ritual practices. Both communities have long-standing wood carving traditions that are linked to male initiation schools.
The head of this staff has a coiffure that relates to the mud hairstyles adopted by young male initiates among the Ntwane. It consists of a mixture of clay and animal fat, which is rubbed into the head and shaped to form a helmet-like structure. 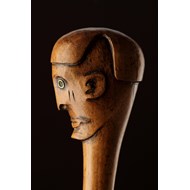 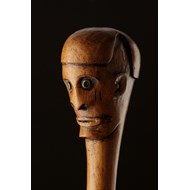 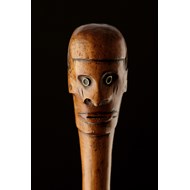 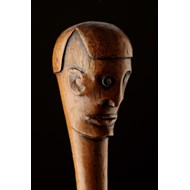 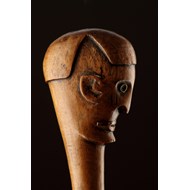 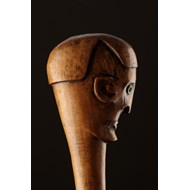