Caption Literature
A Greek South Italy Black Glazed Pottery Bell Krater Decorated in the Six’s Technique with Incised and White Painted Details of Stylised Grape Vines and Four Birds Including an Owl
Good un-restored condition
Gnathian Colonies – 4th Century BC
Size: 22cm high, 23.5cm dia. – 8½ ins high, 9¼ ins dia.
Gnathian ware is named for the site of Equazia on the Adriatic coast of Apulia and the pottery from ancient Gnathia is distinguished from other wares by the technique of decoration which consisted of covering most or all of the surface with black slip, usually by dipping, and then applying the decoration in added colours, slips of white and red, directly onto the black surface. However, with the Six’s Technique the details are not incised into the added colours, but painted with a brush and if incision exists it is directly on the black ground. By coating the white slip with a thin wash of diluted black slip, a yellowish tint was produced, useful for representing metalwork. The same diluted glaze could be used for shading and a variety of colour tones, which would pick out the subject matter and thereby impart a sense of three-dimensionality.
The pottery mixing bowl or Krater was of great importance in both Greek festive and daily drinking. It was regarded as an essential to the civilised economy of mixing water with wine. The Greeks regarded peoples who drank their wine undiluted as somewhat barbaric. Herodotus records that Cleomenes went mad because he spent a certain amount of time with the Scythians and ‘acquired the habit of taking wine without water and went off his head in consequence’! 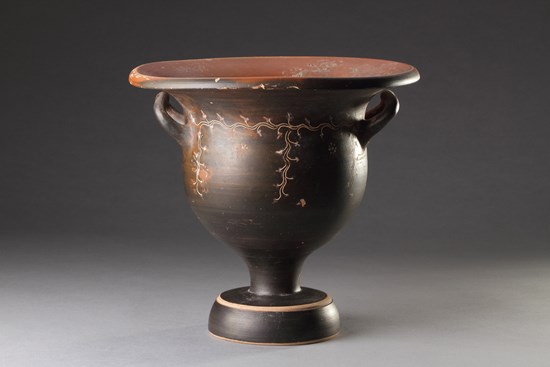 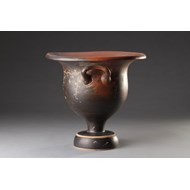 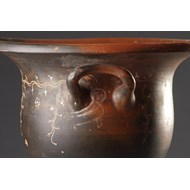 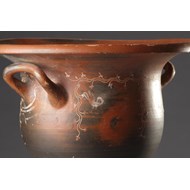 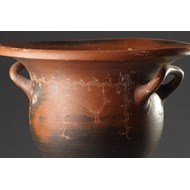 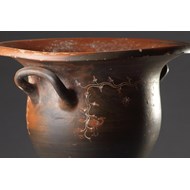