Caption Literature
A Rare Native American Navajo 'Talking God' or 'Yéi Bichéi' Holyway Ceremonial Shaman’s Mask
Hide with abstract designs in charcoal and clay pigments an Eagle feather tied to one side a shell to each eye and to the mouth sinew attachments
19th Century
Size: 40cm high, 32cm wide (max) – 15¾ ins high, 12½ ins wide (max)
The Nightway is one of the most important Holyway ceremonies and when speaking English is referred to by the Navajo as ‘ye bichai’. This healing rite is said to be particularly curative of all ailments of the head. Performed by a medicine man or Shaman, it can only take place after the first frost and before the first thunderstorm of spring, when the snakes are in hibernation and there are no lightning flashes in the sky. During the last of nine nights the ‘yé i’ deities appear, whose leader is known as ‘Talking God’ or ‘Maternal Grandfather of the Gods; Yéi bichéi’.
In ancient times the Navajo were semi-nomadic hunter-gatherers moving in a seasonal round collecting wild plants and hunting game from favoured campsites. They learned farming techniques from their Pueblo Indian neighbours, such as the Hopi, but would supplement supplies by raiding the villages for their ripe crops. They eventually lived in close proximity to the Hopi and adapted many aspects and elements of their culture to suit themselves, including the weaving of textiles. This ‘Talking God’ mask was probably inspired by Pueblo prototypes. 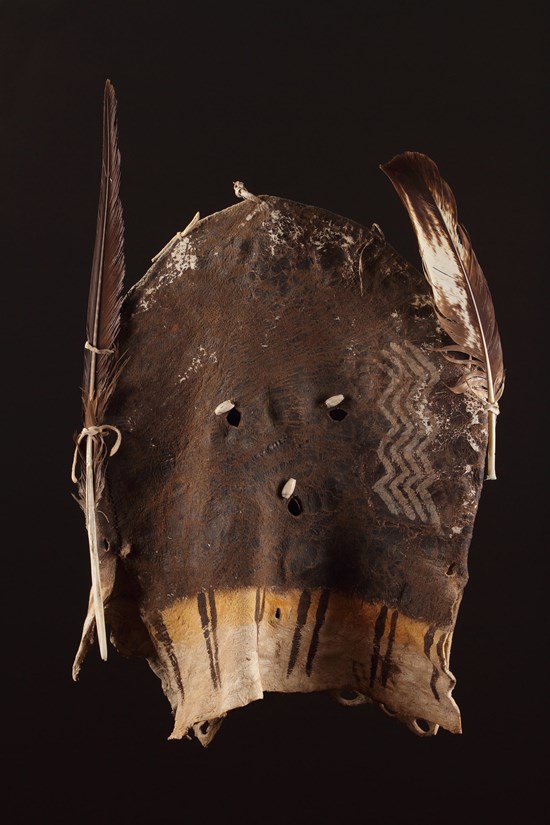 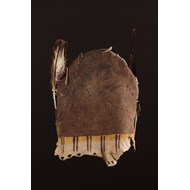