Caption Literature
A Large Victorian Mahogany Cased Taxidermy Display of 29 Birds Including 17 Exotic South and Central American Humming Birds, A New Guinea Bird of Paradise, An American Derby Flycatcher, A Tangara Bird and nine others of South American Origin
The glazed door opening to reveal a jungle setting the birds perched on flowering branches above a rock strewn pool
Late 19th Century
Size: 77cm high, 56.5cm deep, 108cm wide – 30¼ ins high, 22¼ ins deep, 42½ ins wide
29 Birds Including: Berylline Hummingbird ‘Amazilia Beryllina’; Blue Throated Hummingbird ‘Lampornis Clemenciae’; Rufous Hummingbird ‘Selasphorus Rufus’;Broad Billed Hummingbird ‘Cyanthus Latirostris’; New Guinea Count Raggi’s Bird of Paradise ‘Paradisea Apoda Raggiana’; Frilled Cocquette ‘Lophornis Magnifica’; Violet Sabre wing ‘Campylopterus Hemileucurus’; Derby Flycatcher ‘Pitagangus Sulphuratus’; Goulds Violet Ear ‘Colibri Coruscans’; and a species of brightly coloured Tangara Bird from the South American Tropics
Described as ‘winged jewels’ by ornithologists hummingbirds are the smallest birds in the world, fascinating both for their brilliant iridescent metallic plumage and their amazing powers of flight. They are capable of hovering motionless in the air whilst delicately feeding from flowers, their wings beating up to an unbelievable 78 beats a second. The Aztecs adorned the ceremonial cloaks of Montezuma with the brilliant plumage of hummingbirds and their brides were dressed in a profusion of dazzling hummingbird feather ornaments. Even today in Mexico the hummingbird is regarded as a potent amuletic device, and it is believed that holding one in the hand or pocket will magically draw the object of one’s desire.
Birds of Paradise are the most ornate and colourful assemblage of birds in the world, and like the jewelled hummingbirds, their skins were to be found in Victorian shipments of brightly coloured birds that were sent back to Europe during the 1880’s for the feather trade. 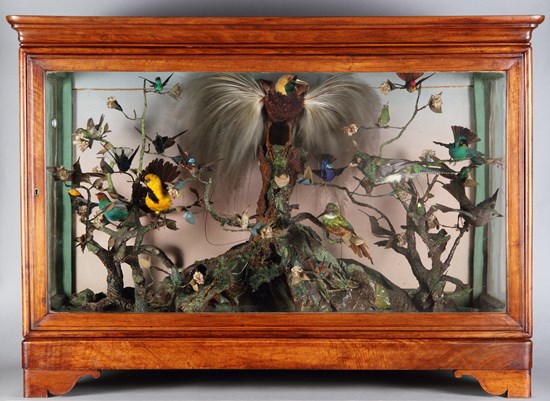 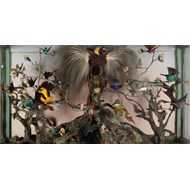 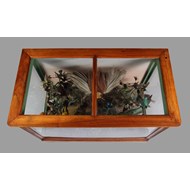