Caption Literature
A Rare Wedgwood Black Basalt Oval Plaque Decorated in Relief with the Triumph of James II King of England Scotland and Ireland Crowned by Peace and Justice with Discord Beneath his Feet
Contained within a silver mount with an integral easel support, an inscription to the reverse
Fine condition
Impressed mark upper case ‘WEDGWOOD’
Late 18th Century / Circa 1773 – 80
Size: 14cm high, 12cm wide, 2.5cm deep – 5½ high, 4¾ ins wide, 1 ins deep
The majority of Wedgwood’s portrait medallions and plaques were adapted from existing medals, relief’s cast in paste, carvings in ivory, wax portraits or horn medallions. The rest were modelled in wax either ‘ad vivum’ or from engravings, drawings, portraits in oils or sculpture by artists employed or commissioned by Wedgwood. Black basalt made a marvellous medium for portraiture plaques. As hard as both glass and porcelain, it was produced to give the appearance of antique bronze.
An interesting inscription in white to the reverse of this plaque details the source for this scene as being a French late 17th century carved ivory plaque in the Victoria and Albert Museum signed ‘Jacobus Constantin fecit’. It states: ‘probably French 17th century and possibly made to commemorate the suppression of the Monmouth Rebellion in 1685’.
This was an insurrection in South West England against King James II led by the Duke of Monmouth, illegitimate son of Charles II. The Duke of Argyll led a revolt in Scotland against James and persuaded Monmouth to launch a rebellion in the South West. He landed at Lyme Regis in Dorset and was proclaimed King at Taunton, but could muster only limited support. He failed to take Bristol and with forces inferior in training, experience and equipment to the King’s army was routed at Sedgemoor. Monmouth was captured a few days later and executed.
James punished all those involved through the ‘Bloody Assizes’, a series of trials held in the South West by Judge Jeffreys. Of 1400 prisoners brought before him, 300 were hanged and 800 were sold as slaves in the Colonies. Already disliked for his staunch Catholicism, these trials were so resented that within three years of his accession he had provoked the widespread opposition that culminated in the ‘Glorious Revolution’, which replaced him on the throne with William and Mary. James II escaped to France where he was warmly received by Louis XIV and there later died in exile.
See also: V&A Musuem
King James II (1633-1701; r. 1685-8) crowned by Peace and Justice
Oval medallion
by Jacobus Constantin (signed)
Netherlandish or French, produced in Britain; c.1685
Ivory in glazed tortoiseshell and wood frame; 25cm high (whole) 15cm
(ivory alone) 9¾ ins high (whole) 6 ins high (ivory alone)
Inv. no. A.13-1937
Bought for £13 2s 6d through Durlacher Brothers, 142 New Bond Street,
London W1, at Christie's, London, 15 April 1937 (Bernard Currie
Collection), lot 43
Formerly Currie Collection, Minley Manor, 1908
Condition: A small section (about 2 x 1 cm) has been gouged out of the
back. A band of rubbed red velvet, presumably once part of a backing or
lining, runs round the circumference of the reverse.
The oval relief shows the King James II of England, the brother of King
Charles II, full-length, seated, resting his left foot on the shoulder
of a naked prostrate defeated figure of Discord, who clasps a serpent in
his left hand. The King rests his left hand on a baton, and looks
towards his left. On his left is a female allegorical figure of Justice,
holding a sword and scales in her left hand, and crowning the King with
a laurel wreath, along with another allegorical figure of Peace, who
stands on the King’s right, holding an olive branch. The relief may
symbolize the defeat of the 1685 rebellion led by James, Duke of
Monmouth (1649-85).
The relief is signed on the reverse: ‘Jacobus Constantin fecit.’ The
artist has not been further identified, but may have been of
Netherlandish, or perhaps French, origin, working in England for the
court. The composition is likely to be derived from an engraved source,
although this has not been identified. An elaborate monument to James II
(h. 180 cm) in ivory, ebony, tortoiseshell and silver, possibly by the
Netherlandish sculptor Matthieu van Beveren (c.1630-90) is in the Royal
Collection at Windsor Castle (Theuerkauff 1975 (Beveren), fig. 23 on p.
43, and pp. 42-9). Although that piece is highly unlikely to be by the
same artist as the author of the present relief, it is broadly
comparable in date and style.
Bibliography:
Minley Manor 1908, p. 3; Review 1937, p. 4, pl. 4;
Theuerkauff 1975 (Beveren), p. 48, fig. 26 on p. 47; Theuerkauff 1985,
p. 49, fig. 4 on p. 48.
On view in the British Galleries, room 56d, case 8 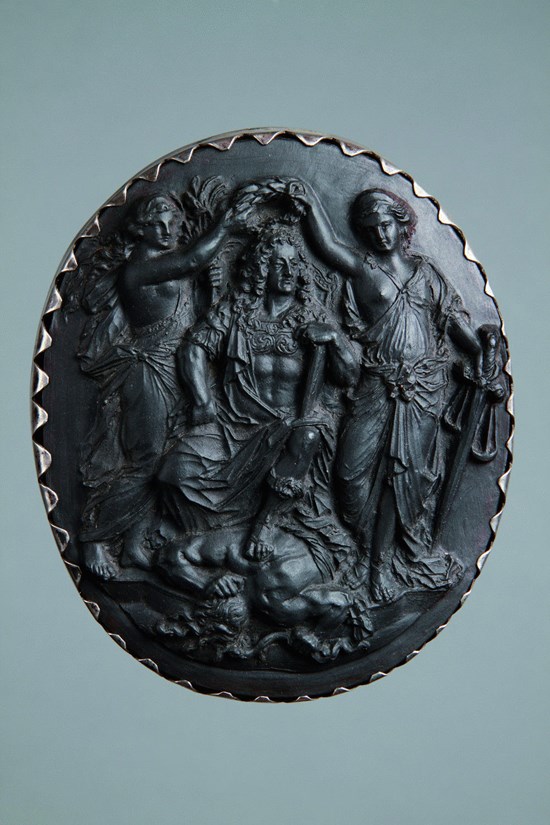 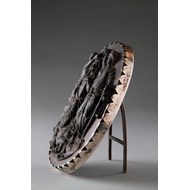 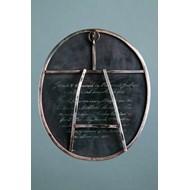 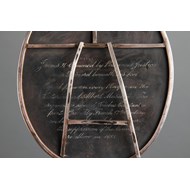 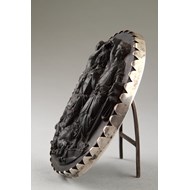