Caption Literature
An African Central Zaire Lega Peoples Ceremonial Headdress Made from the Bony Armour of a Temmincks Pangolin Surmounted with a Fibre Bound Boars Tusk the Fibre Chin Strap Edged with Cowrie Shells
First Half 20th Century
Size: approx: 20cm high, 17cm dia. – 8 ins high, 6¾ ins dia.
See: Finch & Co catalogue no. 12, item no. 31, for a specimen of a Temmincks Pangolin and catalogue no. 19, item no. 61, for another Lega hat
cf: A Lega Headdress made from a Pangolin in the Stanley Collection of African Art in the University of Iowa Museum USA
These ceremonial hats were regarded by the Lega as sacred objects and were only worn by high-ranking initiates of the Lega Bwami society. Demonstrating the status of its owner, the headdress was used in dances to carry an important symbolic message. To the Lega the pangolin is a cultural hero who, they believe, taught them how to roof their houses with an arrangement of large leaves similar to that of its bony scaly carapace. A pattern that is also used in the scarification of the body. Due to the Lega peoples belief in its sanctity strict laws guarantee the pangolin’s protection. They are therefore never hunted and only those found dead in the forest are used by them. 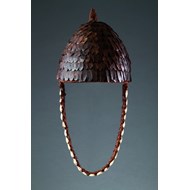 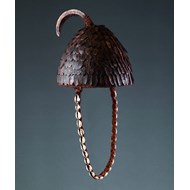 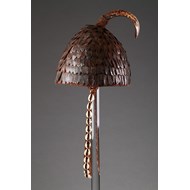