Caption Literature
An Antique Sailors Scrimshaw Engraved Sperm Whale Tooth Depicting a Whaling Ship
Its topsail marked with a ‘B’. In the foreground a Whale being harpooned between two boats whilst two others look on the reverse engraved with the same Ship sailing off the English Coast. A lighthouse on the cliff top two small fishing smacks and a Schooner sailing in the distance
Smooth Dark Patina
Mid 19th Century
Size: 7cm high, 14cm wide, 5cm deep – 2¾ ins high, 5½ ins wide, 2 ins deep
See: Finch & Co catalogue no. 12, item no. 23, catalogue no. 13, item no. 27 and 28 for further examples
The British whaling vessel was distinguished from other ships by her massive timbers, her strength and her capacity for a big cargo of whale oil. Carrying tons of specialised whaling gear it was commonplace for men to go to sea hunting for the whales for two to three years. The longest whaling voyage on record is probably that of ‘The Nile’ of New London, which made a voyage lasting from 1858 to 1869. It was during the boredom of these voyages that the art of scrimshaw flourished giving the sailor a way of combating and enduring his idleness; polishing, carving and engraving the ivory teeth of the sperm whale he had helped to catch. 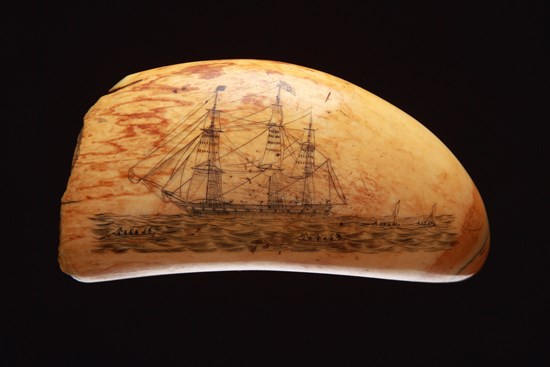 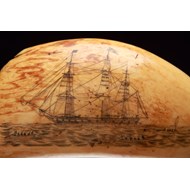 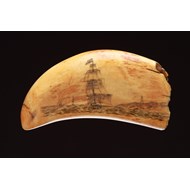 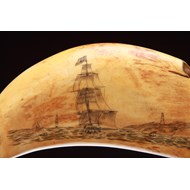 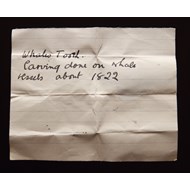