Caption Literature
An Ancient Roman Marble Relief Fragment from a Sarcophagus Depicting Two Dionysian Dancing Figures
The man wearing a low-girdled chiton a himation draped over his left shoulder the woman swaying in a loosely draped chiton falling from her shoulder
2nd – 3rd Century AD
Size: 36cm high, 32cm wide, 10cm deep – 14 ins high, 12½ ins wide, 4 ins deep
41cm high – 16 ins high (with stand)
Dancing was an object of artistic cultivation amongst both the Greeks and Romans and was an exercise not just for the feet, but also for arms, hands and the whole body. Only professionals danced and for any other adult, even at social events, to perform a dance was regarded as impropriety. Religious performances were bound up with the worship of Apollo and Dionysus and consisted mainly of choral dances whose movement varied according to the character of the god and of the festival. During the Roman Imperial period the art of mimic dancing attained an astonishing degree of perfection and these performed by highly regarded artists, were a favourite entertainment. 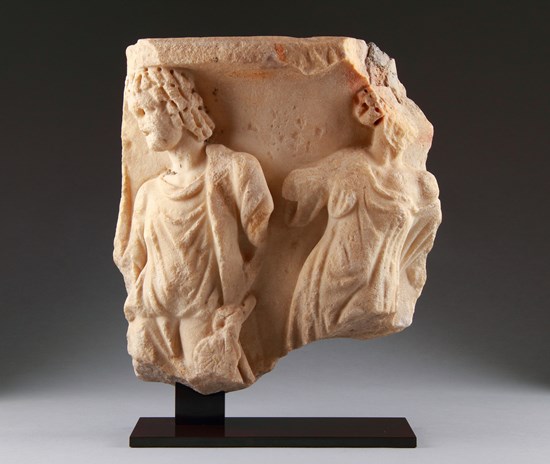 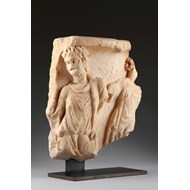 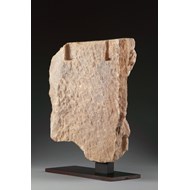