Caption Literature
An Indian Vizagapatam Sandalwood and Ebony Document Box Inlaid with Ivory and Ebony Flowers, Leaves and Tendrils the Hinged Lid with Two Brass Carrying Handles the Four Corners Studded with Brass Rosettes, a Brass Lockplate to the Front the Interior Fitted with Four Small Drawers
Mid 18th Century
Size: 12cm high, 48cm wide, 33cm deep – 4¾ ins high, 19 ins wide, 13 ins deep
The shape and function of these document boxes derive from a European form. They were made to order in Northern India and exported via the port of Goa. ‘Golden Goa’ was celebrated as an entrepí´t for luxury goods. From its markets objects made both locally and elsewhere in India were sent to Europe and to other Portuguese ports in Asia, Africa and South America. The more elaborate pieces of furniture inlaid with ivory and sometimes mother-of-pearl were crafted in Northern India whilst the Goanese cabinet makers produced furniture of assorted exotic coloured woods. Writing slopes, stationery and document boxes were a standard requirement of all East India Company officials and of all the merchants in the export trade who had settled in the Indies. The sandalwood used to craft the box would help protect and preserve the paper documents and books in the climate of India. 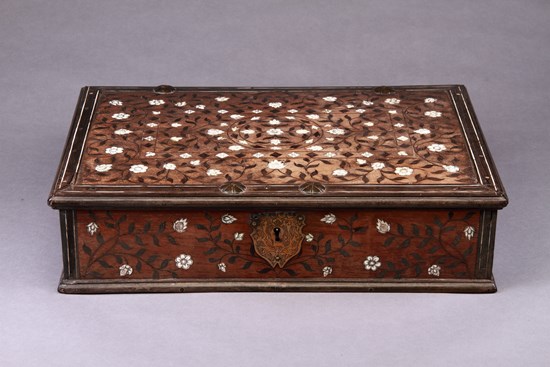 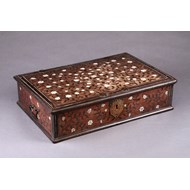 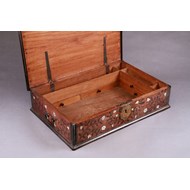 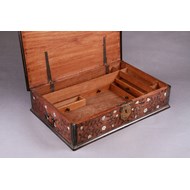 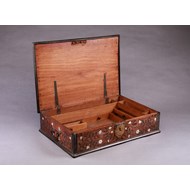 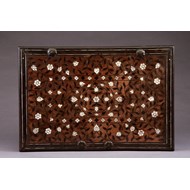 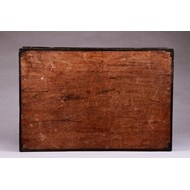 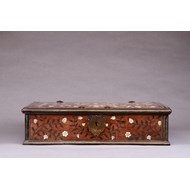 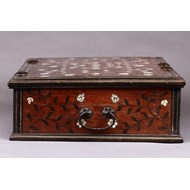