Caption Literature
Two Rare Australian Northern Queensland Cape York Aboriginal Fish Hooks One Large of Tortoiseshell and Another Small One of Haliotis Shell with a Sharp Point Both Bound to Lengths of Carefully Twined Plant Fibre Cord
An old vellum label attached inscribed in ink ‘Fishing Lines of Natives Cape York Oct 7 1848’
19th Century
Sizes: hook: 1.5cm dia - ½ ins dia. / barb: 12cm long – 4¾ ins long
Cape York is the most northerly part of the Australian continent and was home to the Kaurareg aboriginals and these hooks were probably collected by Oswald W. Brierly an artist of the HMS Rattlesnake on a surveying expedition to northern Australia and Papua New Guinea during 1848 to 1850. On the 6th October 1848 the ship put down anchor at Cape York and as this was to be one of their chief recouping and contact points, their first essential task was to find a plentiful supply of fresh water. Whilst looking for water the next day (Oct 7th 1848) it is recorded in Oswald Brierly’s journal of HMS Rattlesnake (Oct 1848 – Dec 1849) thatâ€¦ ‘At our first landing we were met by five blacks and of these three were fully six feet in height. One only of these tall ones was strongly built the others having thin and stringy spindle shanks and narrow chests. Most of them carried a basket slung over the right shoulder and coming over the left arm. This had fish hooks, bits of tortoiseshell, a kind of mealy fruit and some bits of pandanus fruit and a few rubbishy odds and ends, bits of paper etc. They were all desirous of getting tobacco, or chucka as they called it and when I looked into my haversack to give one of them a bit, the rest would all rush and crowd their heads together trying to seize it at the same timeâ€¦’ On Oct 9th 1848 he writesâ€¦ ‘I gave them some tobacco for which I got a carved arrow in returnâ€¦’
Queen Victoria appointed Brierly her official maritime painter in 1874 and in 1881 he became curator of the Painted Hall at Greenwich. He was knighted in 1886 and died in December 1894. Throughout his life he kept meticulous notes and journals, and made innumerable sketches and paintings, which are now kept in the Mitchell Library in Sydney, Australia.
Australian aboriginal fishhooks are very seldom found as the old types made of natural materials were quickly replaced by European metal hooks for which they traded. By 1898 most of the Kaurareg’s traditional way of life had disappeared under the rapid expansion of pearling activities and the establishment of London Missionary Society stations from 1871 onwards. 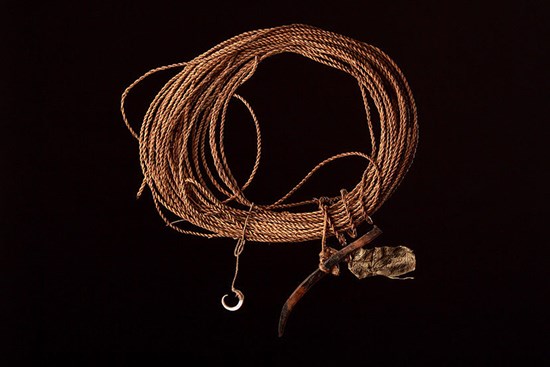 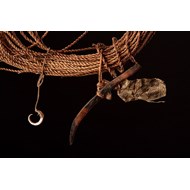