Caption Literature
A Bering Sea Eskimo Inuit Carved Walrus Ivory Anthropomorphic Figure of a Polar Bear with its Cub, probably Amuletic
Early 19th Century
Size: 3.5cm high, 9.5cm long, 2.5cm wide – 1½ ins high, 3¾ ins long, 1 ins wide
See: Finch & Co catalogue no. 18, item no. 36, for another anthropomorphic figure
Traditional Eskimo Inuit carvings were small as large ones would have been burdensome to carry, as they were a nomadic people who moved around during the course of their annual seasonal cycle.
Implicit in their 19th century worldview was the belief that the humans could transform themselves into animals, animals could become people and spirits could appear as animals or humans. This belief was communicated in the multi-image treatment of objects, and this fine carving perfectly encapsulates this theme of transformation. 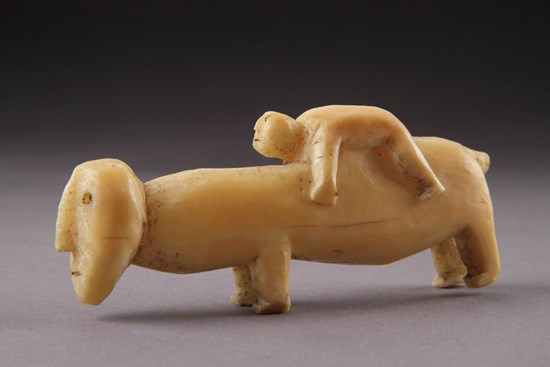 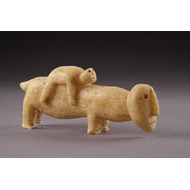 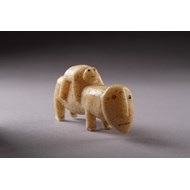