Caption Literature
A Large Collection of Eighty Four West African Asante Gold Weights ‘Mrammuo’
Including; Figures Royal Shoes and Swords Matchlock Guns Shields Bells Fruit Birds Good Luck Charms ‘Suman’ and Flat Weights decorated with ritualised symbols such as the Swastika, said to represent the hand of the Colobus Monkey and a Cast Brass Box for carrying gold dust and nuggets
Late 19th Century
Sizes: approx: 1cm x 0.5cm (min) – ¼ ins x 1â„8 ins (min)
11cm long (max) – 4½ ins long (max)
3.5cm high, 9.5cm wide, 4.5cm deep – 1½ ins high, 3¾ ins wide, 1¾ ins deep (box)
The West African Asante used these little weights for measuring gold dust and nuggets that had been hacked out by slaves of the gold bearing rock that everywhere surrounded them. The goldsmiths were of great importance to the King and his court and worked in the Royal compounds. They claimed descent from Fusu Kwabi, the first member of their trade who was reputed to have come down from heaven over 400 years previously to teach men to cast gold. Only they were allowed to make the elaborate gold ornaments and objects for royal personages and to cast the little weights and boxes used by Royalty.
Certainly no wealthy Asante could be expected to carry his own gold and a bearer always accompanied him on expeditions from his own compound carrying the box of gold dust, a set of weights and a small pair of scales in order to pay for his master’s purchases in the pure soft gold of the realm. The naí¯ve charm of these naturalistic or geometric weights cast of brass has made them a unique art form. 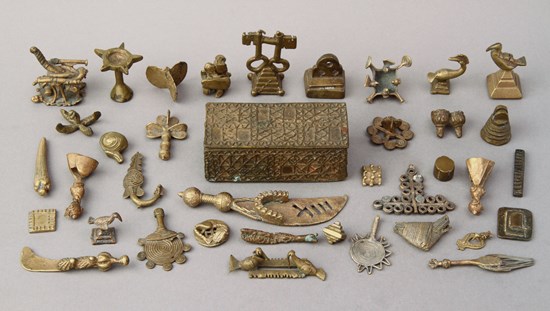 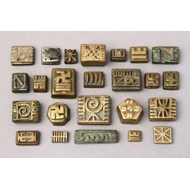 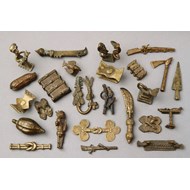