Caption Literature
An Early Celtic Irish Silver Torc found in 1778 west of Carrowmore Loughrea Ireland
Circa 800 – 600BC – Late Bronze age
Size: approx: 18cm high, 18.5cm wide – 7 ins high, 7¼ ins wide
Strabo, using the work of Posidonius of the 11th century BC, wrote of the Celts ‘to the frankness and high-spiritedness of their temperament must be added the traits of childish boastfulness and love of decoration. They wear ornaments of gold and silver, torcs on their necks, and bracelets on their arms and wrists, while people of high rank wear dyed garments besprinkled with gold’.
The torc or ‘sacred ring’ was a metal neck ring in gold, silver, bronze or sometimes electrum which curved to fit closely around the neck. They were also worn by the peoples of the Bronze Age as well as of the later Iron Age. This design of torc is known as the Tara type and is found in Ireland, Britain and northern France. Although it is generally held that all those found outside Ireland were exported from there. They were not only used for adornment, but also as a special purpose currency for specific kinds of contracts and transactions. Later on they were used as votive offerings to the gods being placed as deliberate deposits sometimes in lakes or marshes. The possessing of torcs, particularly those of gold and silver, probably occurred within the context of their control and exchange by a small powerful elite of high-ranking individuals. 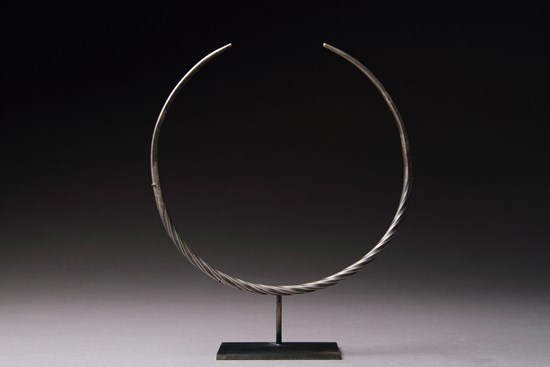 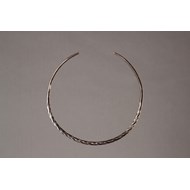