Cased Specimen of a Globe or Spiny Puffer Fish

Caption Literature
A Curious and Unusual Antique Cased Specimen of a Globe or Spiny Puffer Fish
With an old label to the interior stating: The Globe Fish, or Sea-Hedgehog.
The Porcupine Globe Fish (Diodon Hystrix), sometimes two feet in length, is remarkable in being covered with spines, hence often called the ‘Sea Hedgehog’. Normally it has a rather elongated cylindrical body, with a distinct and well-developed tail-fin, and a scaleless skin well armed with stout spines of variable length. For purposes of defence, a portion of the oesophagus is highly distensible and capable of being inflated with air. After swallowing air the whole animal is blown out like a balloon, and as a consequence the spines stand out at right angles from the tense skin. In this condition it floats back downwards and is perfectly helpless but at the same time safe from all attack. To return to its normal condition the air is expelled, with a loud hissing noise, from the oesophagus through the mouth and gill openings.’
Late 19th – early 20th Century
Size: 39cm high, 42.5cm wide, 27cm deep – 15¼ ins high, 16¾ ins wide, 10½ deep
Now known by the scientific name ‘Diodon Holocanthus’, the spiny puffer fish are reef dwellers living in tropical and subtropical waters. Their powerful jaws armed with fused teeth enable them to crack the shells and skeletons of many marine invertebrates. However, when threatened, puffer fish enlarge themselves by gulping water and once distended they can barely move hindering their ability to swim, but their spines make them practically impossible to attack.

Cased Specimen of a Globe or Spiny Puffer Fish 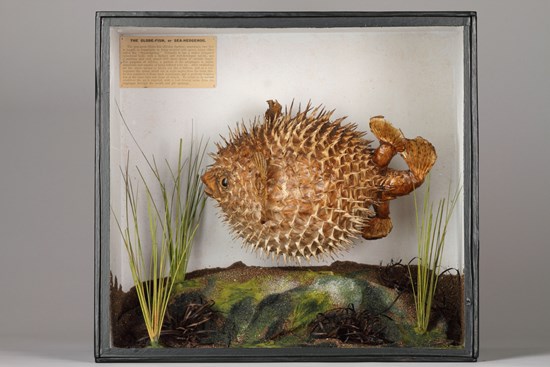 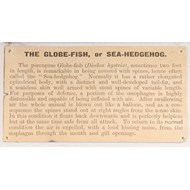 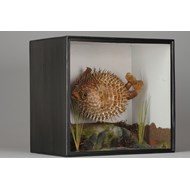