Caption Literature
An Arctic Bering Sea Yupik Eskimo Carved Walrus Ivory Drill Shaft or Wedge with Pictographs Depicting a Walrus Hunt
Late 18th Century – Early 19th Century
Size: 52cm wide – 20½ ins wide
Pictographs or miniature engravings on ivory or bone were produced combining unusual technique and artistry to portray scenes from a vast and stark environment. They are unique to Eskimo culture. Consisting of small silhouettes picked out in black (made from oil and soot) they represent four men in a skin boat hunting walrus, with other walrus in the sea and together with seals on an ice floe, a bird flying above.
Wedges are used for making wood splints and for separating blocks of snow, but this may also have been used as a drill shaft with a hide strap that had handles on either end to rotate the shaft. The drill shaft is used by the Eskimo peoples south of Norton Sound to make holes or create a combustible level of heat for a fire. The peoples north of Norton Sound traditionally use a bow drill, for these tasks.
After 1848 when the first American whaling vessel passed through the Bering Strait these engravings became very popular with the ships crews. They began to depict sailing ships and firearms and became more heavily and thickly worked, sometimes with animals and landscapes in perspective with delicate shading. In the late 19th century the whole tusk would be covered and often made into objects such as cribbage boards in order to suit European taste. 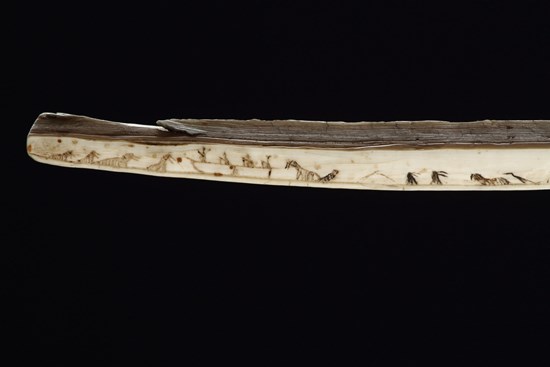 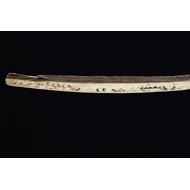 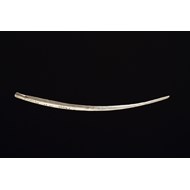