Caption Literature
A Rare Hoard of 13 Early Celtic Iron Age Northern Gaul Bronze Socketed axe heads
Found in Longrave, Caen, France in 1929 during the clearing of a forest
Circa 800 – 400BC
Size: approx: 7.5cm high, 8cm wide, 3cm deep – 3 ins high, 3¼ ins wide, 1 ins deep (each)
The Celtic Iron Age roughly describes the period from about 800BC until the Roman conquest of Britain and northern France around AD43. It was a time of huge social and economic change. It witnessed the end of the Bronze Age cycle of subsistence farming and the beginning of a more complex Europe, which in all its essentials was to change little until the age of exploration and the conquering of the oceans in the 16th Century.
During the late Bronze and early Iron ages individuals of high status maintained their position by controlling the supply and exchange of copper alloy goods. It is believed that demand from the Mediterranean States created an over stimulation of bronze production in both Brittany and Britain and that these surpluses saw large quantities of the alloy taken from circulation and buried in the ground, or thrown into rivers and marshes as votive offerings. The increase of these buried ‘hoards’ at this time has been explained as a socio-religious mechanism to remove the surplus from circulation, thus increasing the value of the metal and the status of elite individuals. 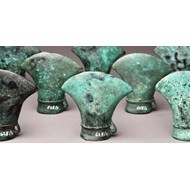 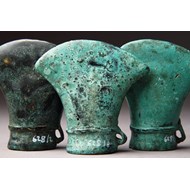