Caption Literature
A Scottish Amuletic Hunting ‘Grandeln’ a red stag tooth silver and gold lapel brooch worked with a cluster of oak leaves on an upturned ‘lucky’ horseshoe
Marked ‘M & S’ for Marshall & Sons of Edinburgh
Circa 1840 – 60
Size: 3.5cm high, 3cm wide – 1½ ins high, 1¼ ins wide
The gleaming velvety white canine teeth from the upper jaw of the red deer are the mark of a hunter’s success and valued as trophies. Often given as love tokens they were worn not only as adornment, but also as a talisman giving protection from danger.
They also have a particular significance as an ancient emblem of fertility for when the two blunt canine teeth are placed together they bear an unmistakable likeness to female breasts. Sacred to the Roman goddess Diana and the Greek goddess Artemis the stag later became part of the Christian legend of St Hubert and St Eustace. The patron saint of hunting St Eustace, a Roman general was converted to Christianity when the crucified Christ appeared to him between the antlers of a stag. The vision of the stag also became part of the legend of St Hubert and is a subject medieval and Renaissance artists frequently portrayed. 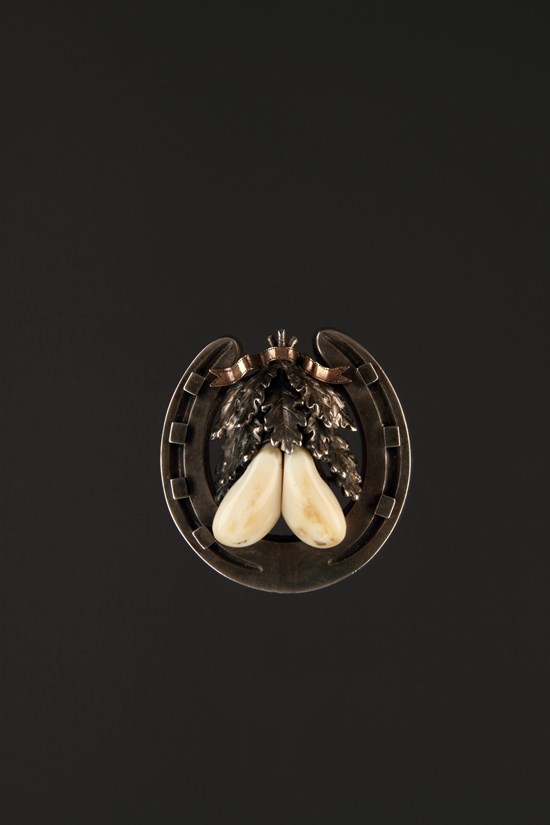