Caption Literature
An Interesting and Curious Wall Bracket Carved from an Ancient Oak Beam from Bristol Cathedral Profusely decorated with acorns and oak leaves with a squirrel and blackbirds sitting amongst the branches below a wreath of ivy leaves and berries
A brass plaque to the reverse detailing its history reading: ‘This Bracket carved from an Oak Beam originally a part of the Bristol Cathedral, and exhibited in the Bristol Industrial Exhibition October 1865 Was Presented to the Hon. Col. F.W Fitzhardinge Berkeley whose ancestor founded that noble pile’ By Henry Edwd. Allen
Circa 1865
NOTE: carved by G Yeo
Size: 49cm high, 44.5cm wide, 28cm deep – 19¼ ins high, 17½ ins wide, 11 ins deep
Francis William Fitzhardinge Berkeley second Baron Fitzhardinge of Berkeley Castle, Gloucestershire, born 1826, was Lieutenant Colonel of the Royal Horse Guards, a Member of Parliament and Colonel of the South Gloucestershire Militia. His ancestor Robert Fitzhardinge founded the abbey of St Augustine in 1148 on the site where Bristol Cathedral now stands. The Chapter house and Abbey Gate House can still be seen. Bristol Cathedral is a major example of an English ‘Hall Church’ and is one of the finest to be found anywhere. In the 1860’s plans were drawn up to rebuild the Nave to its medieval design, and the architect J.L Pearson also added two towers at the West End and reordered the interior. It is probable that the oak beam used to make this wall bracket came from the cathedral at this time. 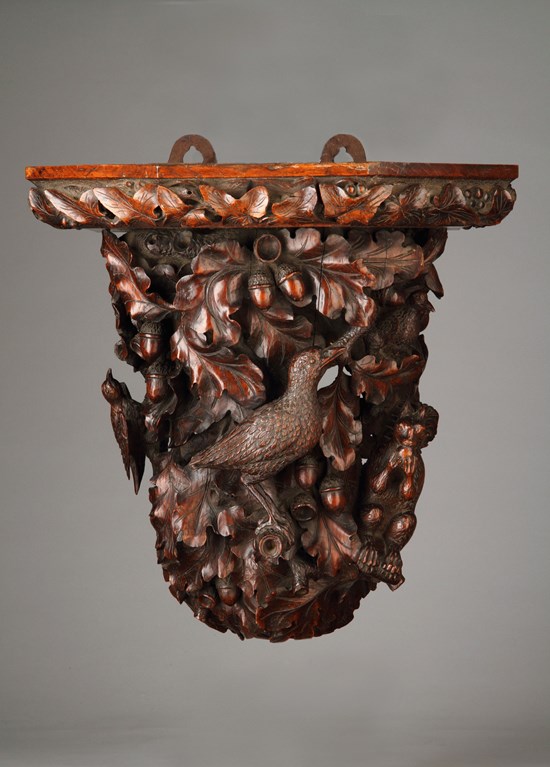 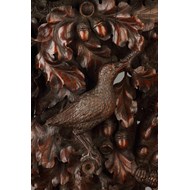 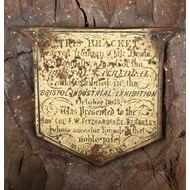 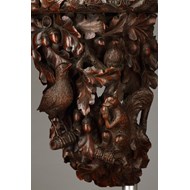 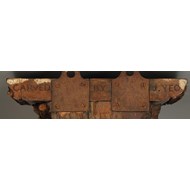