Caption Literature
A Fine Italian Micro-Mosaic Depicting the Basilica and Piazza of St Peters in Rome set in a Belgian black marble base for use as a desk weight
Mid 19th Century
Size: 16cm wide, 12.5cm deep, 2cm high – 6¼ ins wide, 5 ins deep, ¾ ins high
Taken from engravings, these images were produced in the micro-mosaic workshops of the Vatican in Rome and were intended as a picture souvenir that a grand tourist could easily carry home. This view of the domed Basilica at the far end of the square is unusual as it depicts the scene from ground level as opposed to the aerial view typically depicted to show off Bernini’s magnificent elliptical colonnades, which are sometimes referred to as the embracing arms of St Peter.
A famous and favourite attraction, the enormous basilica was begun in 1506 by Bramante and modified in 1547 by Michelangelo who designed the dome. It was completed in 1606 by Maderno and Bernini’s majestic baroque colonnade was added in 1657. The fountains are by both Bernini and Maderno, and the ancient central obelisk was originally in the Circus of the Emperor Nero. 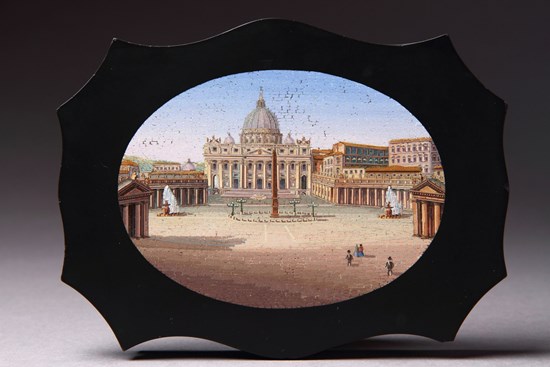 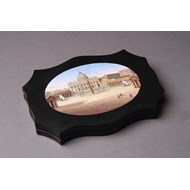 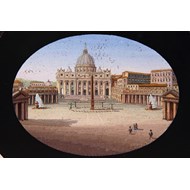