Caption Literature
A Victorian New Zealand Gold-Rush Bar Brooch
Mounted with five gold nuggets and a greenstone Nephrite heart suspended on a chain
Late 19th Century
Size: 5cm wide – 2 ins wide
New Zealand is rich in gold and it is found almost everywhere from the North Cape in the North Island to Stewart Island at the extremity of South Island. Little was known about its occurrence until 1852 when reports were circulated of the gold mines being opened up in Victoria in Australia and a reward committee in Auckland offered a bonus of £500 to the first discoverer of a payable goldfield in New Zealand. A find was made in the Coromandel district almost immediately, but it was of little importance. However in 1861 a rich alluvial gold deposit was discovered at Tuapeka near Otago in the South Island by a prospector with experience of the Californian and Australian goldfields. The latter had attracted large numbers of Californian miners and as the Victorian diggings now began to show signs of exhaustion, thousands of men joined in the great rush to the new strike.
The discoveries of gold on the Clutha River in 1862 proved so extensive that a large settlement sprang up extending for nearly 70 miles along the river banks. The total worth of gold exported from Otago during 1862 amounted to £1,590,000, a huge amount for the time. By 1912 gold to the value of an astonishing £95 million had been produced in New Zealand and gold continued to be mined from the West Coast and Otago fields until after the Second World War. 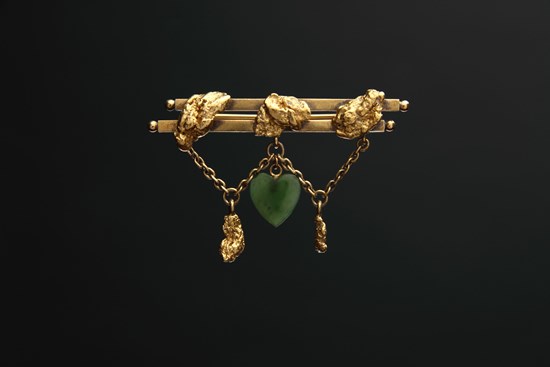