Caption Literature
An Indian Vizagapatam Floral Engraved Ivory Veneered Sandalwood Mantel Clock Case on Four Carved Ivory Paw Feet below a Band of Buffalo Horn
An original key to the hinged back door, decorated with Shiva astride a peacock, silvered brass lock and surround
Second half 19th Century
Size: 18cm high, 12.5cm wide, 8.5cm deep – 7¼ ins high, 5 ins wide, 3¼ ins deep
Vizagapatam artists were skilled at engraving ivory veneers and applying them to an object of architectural design drawn from local western style buildings. The trails of stylised floral designs were inspired from the textiles that were made in the region for export to European markets. Sandalwood was often used as it is both impervious to insects and has a pleasing scent.
As well as larger furniture small objects such as this decorative mantel clock case were made as they were easier to transport and thus more readily purchased by travellers who stopped at the port. In the 18th century the cabinet making industry was established on the beach at Vizagapatam in an area that is now known as Beach Road. The workshops by 1886 numbered ‘nine large houses of ivory workers employing about 50 workmen’ (EB Havell Encyclopaedia of the Madras Presidency 1888). By the early 20th century the ivory works were restricted to three or four ateliers employing sixty people. Today there is only one workshop left trading under the name of ‘Eastern Art Museum’, which employs fourteen craftsmen making fretwork boxes and cabinet ware using acrylic in place of ivory. 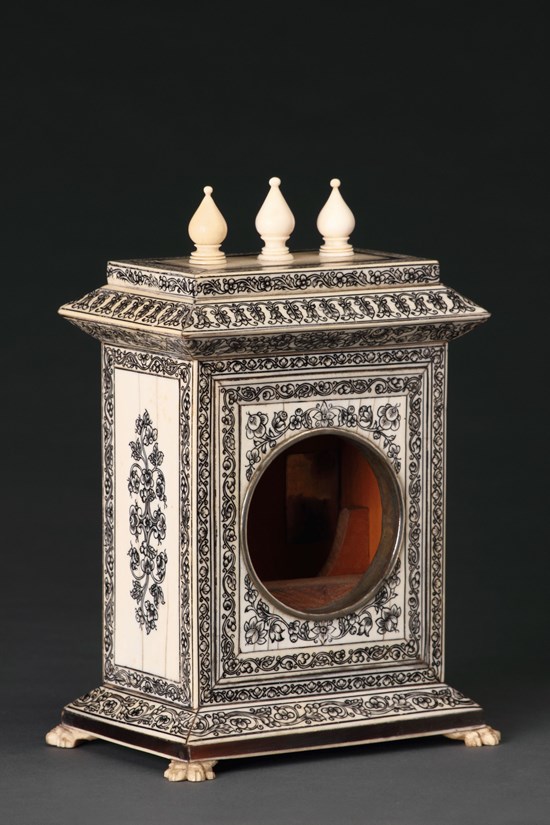 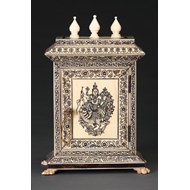 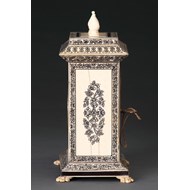 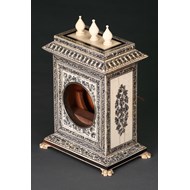 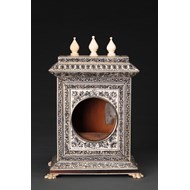