Caption Literature
A Rare and Fine English Painted Cut and Rolled Paper Diorama Depicting a Naval 74 Gun Ship of the Line
Signed and dated ‘A Walker Invt et Fecit 1763’
The stern painted with ‘G III R’ and displaying a figure of Neptune. The port holes open with the cannon run up, an officer holding a telescope nearby two African buglers. Naval ratings climbing the rigging and unfurling sails. The prow with a figurehead of a crowned lion
Circa 1763
Size: 49.5cm high, 59cm wide, 7.5cm deep – 19½ ins high, 23¼ ins wide, 3 ins deep
Diorama and ship models made by seamen on board ship are often highly accurate as the sailor was making an actual copy of the ship in which he served and had the criticisms of his mates to make sure he got the details right. Diorama such as this extraordinary example were often made from the paper of old nautical charts although charts were often used for several voyages as the captain would mark the ships course and compare past performance. Great skill and patience was required as only the most rudimentary tools were available on board, often just a knife given a razor edge on an oilstone, and sandpaper. No scale plans could be had and so everything was made by eye and rule of thumb. Diorama could never be completely finished at sea and once back on shore the glass would be cut to the correct size and a frame found and made to fit around the box. The test of a well-made seaman’s model is the detailed work it contains. This diorama is exemplary in its wealth of detail, looking at it one can travel from the fo’c’s’le to the quarterdeck without a hint of seasickness, and almost hear the wind surging in the lattice of shrouds, backstays, brails, halyards and sheets, the creak of the timbers and the surge of the sea. 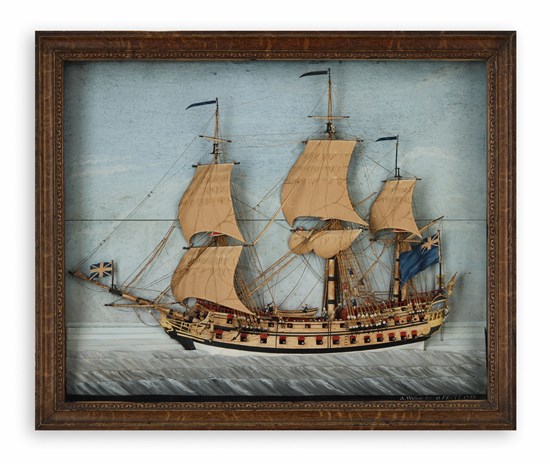 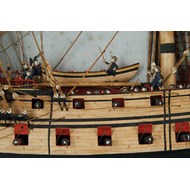 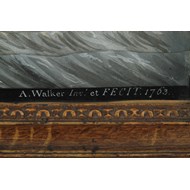 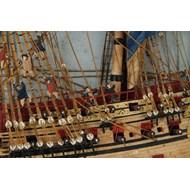 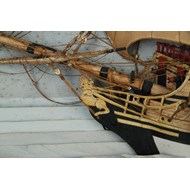 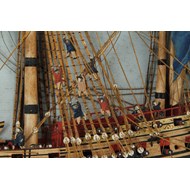 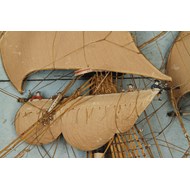 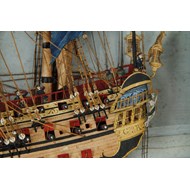 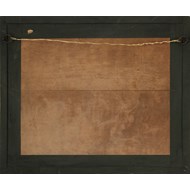