Caption Literature
A South Netherlands Carved Boxwood and Iron Bladed Eating Knife
Contained in its original decorated leather scabbard, the handle carved with the figures of Faith, Hope, Charity and Justice surmounted by four angels heads ending with the figure of a crouching lion. The blade marked; probably Amsterdam
The scabbard stamp and cut decorated with a church steeple surmounted by a cockerel
Mid 17th Century
Size: 26cm long – 10¼ ins long
The basic form of the table knife, a single edged blade more or less pointed and with a handle has remained virtually unchanged since Antiquity, although the details of construction, shape and decoration have been subjected to many variations. Before the late 17th century it was normal practice all over Europe for everyone to carry his own cutlery, especially a knife in a leather case. Sometimes they fitted into subsidiary sheaths in the scabbard of a dagger and were regularly worn as part of everyday dress. The carrying of individual cased knives or cutlery is a tradition that survived in many European peasant communities right into the early part of the 20th century. Sheaths surviving with the cutlery that originally belonged to them are rare. 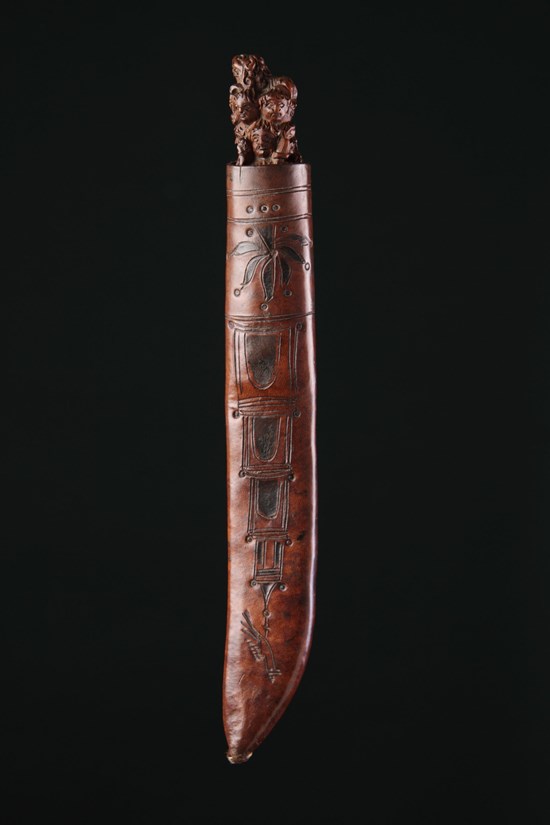 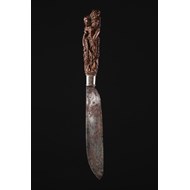 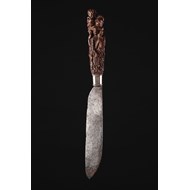 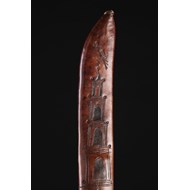