Caption Literature
An English Sailors Scrimshaw Patriotically Engraved Sperm-Whale Tooth Decorated with a finely worked Portrait of Queen Anne, last of the Stuart Monarchs
The reverse with the Royal Coat of Arms unifying England, Ireland and Scotland
Early 19th Century
Size: 18cm long – 7 ins long
British whaling vessels sailed mainly out of London with a few from other ports such as Whitby and Liverpool as well as from the colonies of Australia and New Zealand. The English fleet declined relatively early having reached its maximum in 1820 it ceased to exist after 1859. Most English scrimshaw can therefore be dated to pre 1860.
It is generally true that the best examples of figural scrimshaw were copied from illustrations from either magazines or books. Usually these engravings were done by pricking through a template with a sharp point or blade, often a ground down sail needle.
Queen Anne (1665-1714) presided over the Act of Union, which completed the unification of Scotland and England. Perhaps this scrimshaw tooth was made by a patriotic sailor to commemorate the Acts of Union, the laws that cemented the political union of England, Ireland and Scotland in 1707 and formed Great Britain. 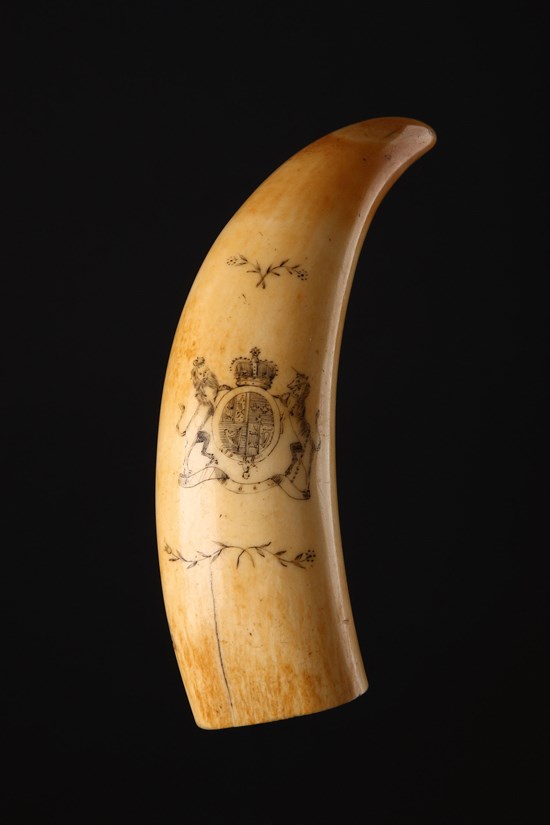 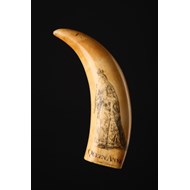