Caption Literature
A Rare Cased Specimen of a Giant Rhinoceros Hornbill ‘Buceros Rhinoceros’ from southeastern Asia
19th Century
Size: 84cm high, 63.5cm wide, 27cm deep – 33 ins high, 25 ins wide, 10½ ins deep
See Finch & Co catalogue no. 12, item no. 3, for an example of ‘Buceros Bicornis’
The Rhinoceros hornbill is one of the largest birds in the rainforests of Asia. Spending their entire lives in the jungle canopy, they feed on fruit and nuts, and occasionally rats, squirrels and lizards. Ancient peoples once revered it as a ‘god of war’, but today its habitat is threatened in Borneo with deforestation.
They have a large wingspan and the gleaming black feathers are maintained by spreading an orange coloured preening oil over them. The casque or golden yellow horn is believed to act as a resonating chamber amplifying the animal’s nasal calls. Although appearing to be heavy it is actually very light consisting of thin yellow cells supported by tiny hollow bones. It is used to perform a variety of tasks such as harvesting food, building a nest and sealing it, and feeding the chicks.
Rhinoceros hornbill usually pair for life, choosing a tree hollow or cavity for building a nest. The female is sealed into the nest by the male using food and droppings to close up the entrance apart from a narrow vertical slit. For the next 50 days the female incubates the eggs whilst the male bird brings food for her and the chicks. Ninety days after the chicks hatch the female breaks out of the nest, but the chicks then rebuild the entrance covering and receive food from their parents for the next 3 months. Finally when they are almost fully-grown they break out of the nesting hole and fly free. 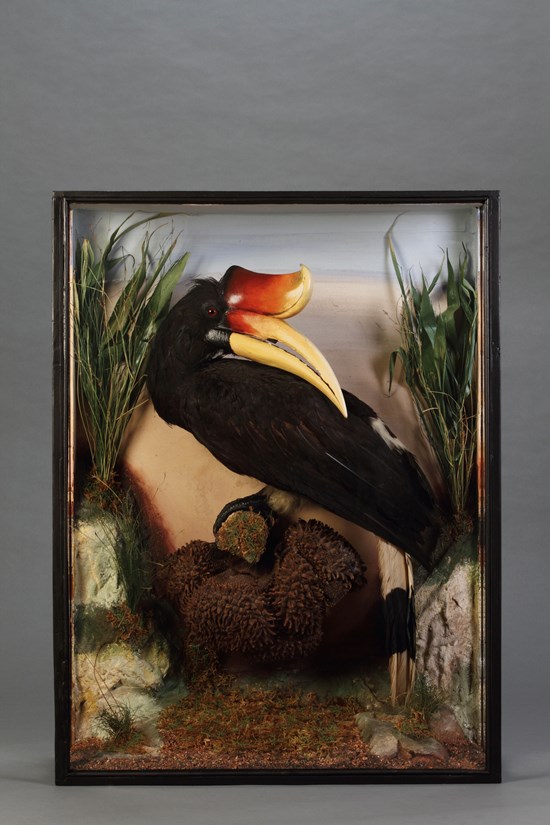 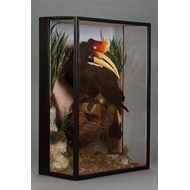 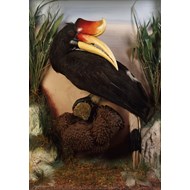